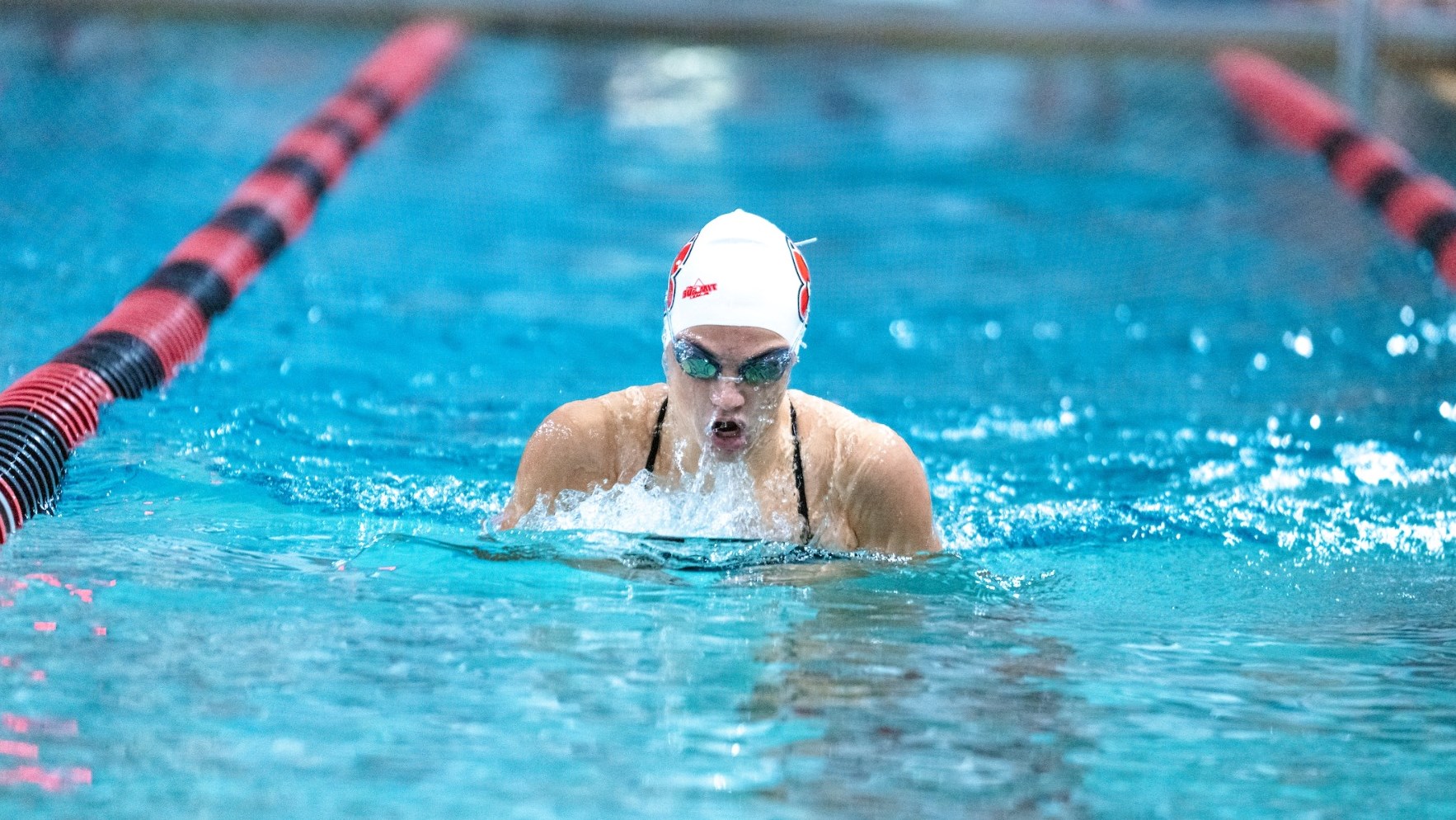 Taylor Buehra freshman, broke two individual school records while the Coyotes closed out the three-day competition by sweeping the 400 free relay heats while both the men and women set school records.

Buhr started her evening with a record in the 100 IM where her 56.73 time from the final won the race. The Coyotes placed in the finals, five in the top eight of the race, in an event that pitted six people from the top 10 lists against each other.

Buhr, of Bettendorf, Iowa, added the school record in the 200m breaststroke later during Saturday’s final session with a winning time of 2:17.22. She knocked out her teammate Cassie Kettering from the top of the all-time charts in both events.

Emily Kahna sophomore, lowered her school record in the 100 Free to 49.73 and became the first to break the 50-second barrier when she won the race in which a teammate was joining Carson White become third and Camilla Brogger-Andersen fifth.

Kahn would wrap up the evening, anchoring the 400 free relay as teammates to victory Tatum O’Shea, Carson White and Brogger-Andersen joined her in a school record of 3:23.08.

Sathre, a senior, lowered his school record time in the 100 IM not once but twice when he clocked 49:20 in the morning heats and came back with 49:18 in the final to win the race at the finish.

Sathr led a trio of Coyotes to the wall in the 100 IM as Grant Wolner and Parker Sunday Second in 50.14 seconds.

SIOUX FALLS — Aiden Carstensen’s school record performance in the 200-yard backstroke on Saturday set the exclamation point for the championship performance of the South Dakota State men’s swim and dive team at the three-day Augustana Invitational at Midco Aquatic Center.

Carstensen, a freshman from Cedar Rapids, Iowa, was one of three singles champions for the Jackrabbits in Saturday’s evening session. After posting the second fastest time in the morning heats of 200 backstrokes, Carstensen came back in the evening session with a record time of 1 minute 47.77 seconds, beating the previously set mark of 1:49.13 Jared Miller in 2018.

His classmate Braxton McGrath came close to emulating Carstensen’s feat in winning the 200 butterflies. McGrath’s time of 1:50.81 marked the second fastest in program history while he finished second Damon Venners Second place time of 1:50.92 is third in the Jackrabbit annals.

Max Weiss finished the sweep of the first three places in the 200 Butterfly for the Jackrabbits with a time of 1:53.27 in third place. Bryan Wong was fifth in 1:53.71.

Rafael Negri continued his impressive weekend in the pool by winning the 100th freestyle title in 44.57 seconds, a mark that now ranks third in program history. Negri led a group of five Jackrabbits in the 10 swimmers final and was joined by on the podium Alexander Kraftwho finished third in 45.21 seconds.

Negri later teamed with Eric Anderson, Murray and Kraft to set a runner-up of 3:00.42 in the 400 freestyle relay to close the meet.

In the longest event of the meet, Jack Ellison finished second in the 1650 freestyle with a time of 16:23.03. Collin Schock finished sixth for the Jackrabbits in 16:36.86.

NEXT
The Augustana Invitational was the final tournament of the fall season for the jackrabbits. SDSU is scheduled to return to action on Jan. 14 when it hosts St. Cloud State in double action.