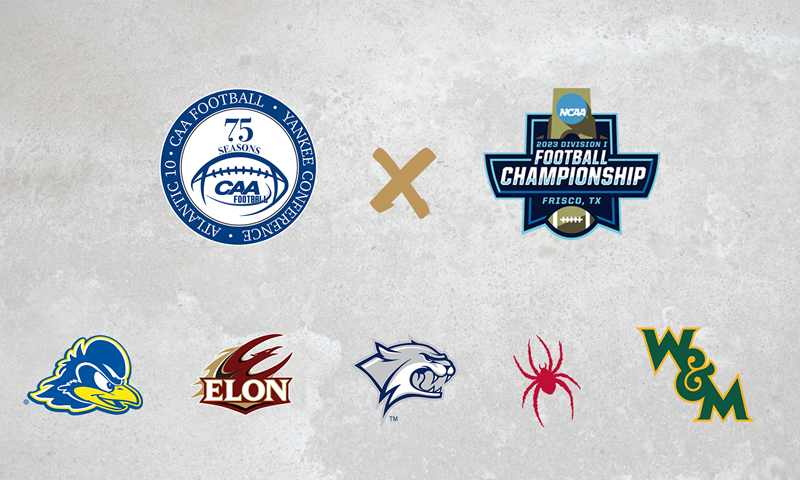 CAA Co-Champions New Hampshire and William & Maria joined Delaware, Elon and Richmond. The five selections are the most for the conference since 2018, when a league-record six squads earned playoff berths. The CAA also had five teams on the field in 2007, 2008 and 2011.

William & Mary (10-1, 7-1 CAA) finished 5th overall and receive a first round bye. The Tribe will host the Gardner-Webb/Eastern Kentucky winner of the second round on December 3 at 2:00 p.m. W&M, which set a program record with 10 regular-season wins and is on a seven-game winning streak, is making its first playoff appearance since 2015.

Elon (8-3, 6-2 CAA) travels to join Southern Conference member Furman (9-2) at 12 p.m. Saturday. The Phoenix, who ended the season on a three-game winning streak, return to the playoffs for the first time since 2018. The Elon/Furman winner takes on #7 Incarnate Word.

Richmond (8-3, 6-2 CAA) hosts Davidson (8-3) from the Pioneer League at 2 p.m. Saturday. The Spiders, who have won five of their last six games, are making the playoffs for the first time since 2016. The Richmond/Davidson winner meets #2 Sacramento State.

Delaware (7-4, 4-4 CAA) welcomes Northeast Conference champion Saint Francis (9-2) at 2 p.m. Saturday. The Blue Hens are back in the playoffs for the first time since spring 2021 when they reached the semifinals. The Delaware/Saint Francis winner meets the No. 1 in the state of South Dakota.

All first and second round matches will be broadcast on ESPN+. CAA Football’s five teams in the playoff field are connected to the Big Sky at most conferences.

CAA Football now has multiple teams for the FCS playoff field for the 32ndnd year in a row, and it’s the 11thth Time in which at least four teams were selected. The conference has made at least one team to the semifinals of the playoffs in the past nine years and has had a team in national championship play 11 times since 2003.