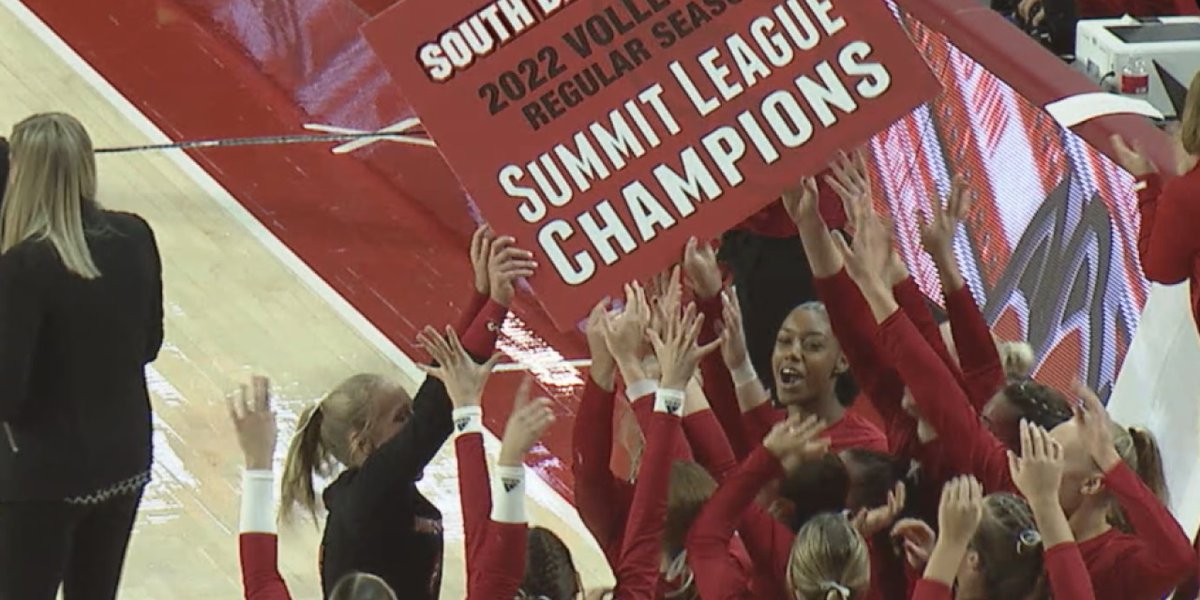 South Dakota’s Senior Day win was a healthy offensive performance for the Coyotes, with four hitters with seven kills each behind Juhnke’s match-high number. Senior Aimée Adams scored her seven kills cleanly and hit a .500 in the match. Three defenders in the back row saw double-digit digs this afternoon, including a match-high 13 dig by senior Lolo Weidemann.

North Dakota (12-17, 9-9 Summit) has seven players with kills on the stat list, with Maddy Hornyak and Marissa Stockman each having nine team-high kills. Stockman also put up four blocks while Hornyak had 11 digs.

Set one saw the Coyotes come out hot, hitting .458 as a group while holding North Dakota on a negative hitting clip. In set two, momentum shifted slightly in favor of the Fighting Hawks, who held the lead until a 17-17 draw. Back to back kills by Kylen Seelock gave the Coyotes their first lead in the second set, 18-17. North Dakota then scored three straight points to take a 20-18 lead and force a timeout for South Dakota. From there, the Coyotes went on a 7-2 run to win the second set. The 2-0 lead put the momentum back on the Yotes and they won set three to secure the seniors’ stage win.

“I really feel like Aimee and Lolo have gained a lot this year. Not only were they really good at holding their teammates accountable, but they were really good at bringing out the best in everyone around them,” said the head coach Leanne Williamson. “I’m delighted that they are sitting back and celebrating with their families and the team, but their careers are not over yet. They have done remarkable things as a group so far and we look forward to next week.”

South Dakota enters the Summit League tournament next week in Omaha as No. 1. Seeded No. 1, the Coyotes earned a first-round bye and play their first game of the tournament Friday at 4:00 p.m. South Dakota meets No. 4 Denver vs. No. 5 South Dakota State game winner.