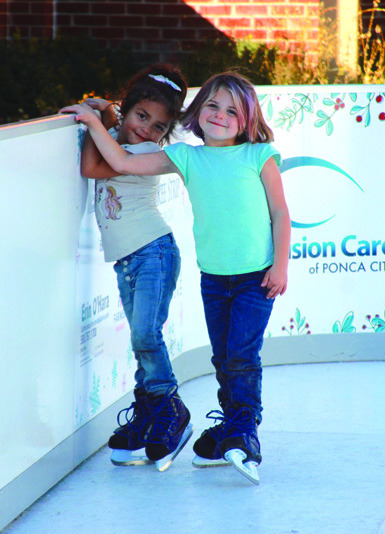 Marland’s Place distributed hot chocolate and cookies to those in attendance for donations, while children from the community enjoyed the new ice rink at Ice on the Plaza. (Photos by Dailyn Emery)

The Ponca City Chamber of Commerce Executive Committee held its regular monthly meeting on Tuesday, November 22 at 11:00 am.

Wendy Stobbe called the meeting to order and then presented her report to the Chamber Chairs.

The Chamber is still working on the process of accepting applications for a new Chamber Secretary.

Tuesday, December 6th is the final meeting of the Kindness Campaign and caps a year of an initiative to spread kindness in the community.

The December Business After Hours will be held on Thursday 15th December at the Marland Mansion.

Senator Bill Coleman will be the master of ceremonies for the chamber celebration on January 26th at the Pioneer Technology Center.

When you hear your ticket being announced on the radio, you have five minutes to call the chamber office at 580765-4400 or toll free 866763-8092 to let them know you have the winning ticket.

Updates on events with organizations in Ponca City and Kay County were then provided by various board members.

Each year, the Ponca City Chamber participates in the American Bus Association’s marketplace, so Trantham will travel to Detroit for the event in February.

The monthly issue What Happens in Ponca City? The video has received 10,000 views this month.

The very first PonCon took place at City Central earlier this month. The event had 100 participants and planning for next year is underway.

The Festival of Angels began on November 23rd and will last until December 30th.

Ally Broome from Ponca Young Employees (PYE) shared that they hosted their Dine and Donate event at Fraizer’s on Saturday 19th November. 10% of proceeds were donated to The Mission and $420 was raised through the event.

PYE’s December event will be a Potluck on December 8th from 5pm to 7pm at the Grand Cigar Lounge. Farha will donate a turkey and all stationery.

Austin Wilkins will take over as PYE President in 2023.

PCDA is working on seven ongoing projects and three new leads this month. Two of those leads came from existing companies, while the third came from the Department of Commerce.

The construction of the spec building is progressing and is now waiting for steel and other metals. PCDA anticipates a June 2023 completion date.

Ponca City won an award for the 200-tree tree farm on North Ash Street in the Keep Oklahoma Beautiful (KOB) on Friday, November 18.

Downtown now has its decorations for the holiday season.

The Ponca City Senior Center is operated out of First Presbyterian Church as their building is undergoing a remodel.

The broadband is completed west of 14th Street and is working east. The project is expected to be 85% complete.

Freedom Homes on Turner has not yet broken ground and has been notified by the city as there is a deadline for construction to begin.

The 5th and Bradley houses bring in bricks but haven’t moved dirt.

Kay County mayors met last week and discussed the 1/3 cent sales tax. While they’re happy that rural fire departments have a little more money, they’re not happy that cities are increasing their sales tax by 1/3 cent.

The university center is currently focusing on spring enrollment and had a kick-off event last Thursday, November 17th.

Construction on the Kay County Courthouse remodel continues and is expected to be completed by June 2023. An open house is planned along with the administration building and the OSU extension building sometime after completion.

The DA’s office deals with marijuana cultivation and has conducted multiple raids with the Oklahoma Bureau of Narcotics (OBN) on individuals who illegally grow marijuana in the county.

There is a growing fentanyl problem in Oklahoma, along with heroin and cocaine on a more regular basis. Counterfeit opioids sold on the street contain fentanyl and have led to multiple overdoses and deaths.

The Oklahoma Main Street Training Conference was held in Ponca City with 46 directors and volunteers from across the state to tour downtown and visit Newkirk for a training session.

Ice on the Plaza opened on Friday, November 18th and had 270 skaters over the first three days. The last skating day is on Sunday, December 31st.

Small Business Saturday takes place on November 26th. Ice on the Plaza will have penguins from 1pm to 3pm.

Kevin Schmitt with Philips 66 has provided an update. Philips is hosting a Need and Energy Education workshop for educators on Saturday, October 29th. They also hosted PTC for an on-site visit. Philips is located in the middle of the Salvation Army’s Angel Tree and Coat Drive.

They have extended the United Way Campaign until November 30th.

Finally, Senator Bill Coleman provided a legislative update. All elections are over and it is known who will take public office.

In addition, tourism is now referred to as tourism and wildlife.

The next meeting will take place on Tuesday 20 December.