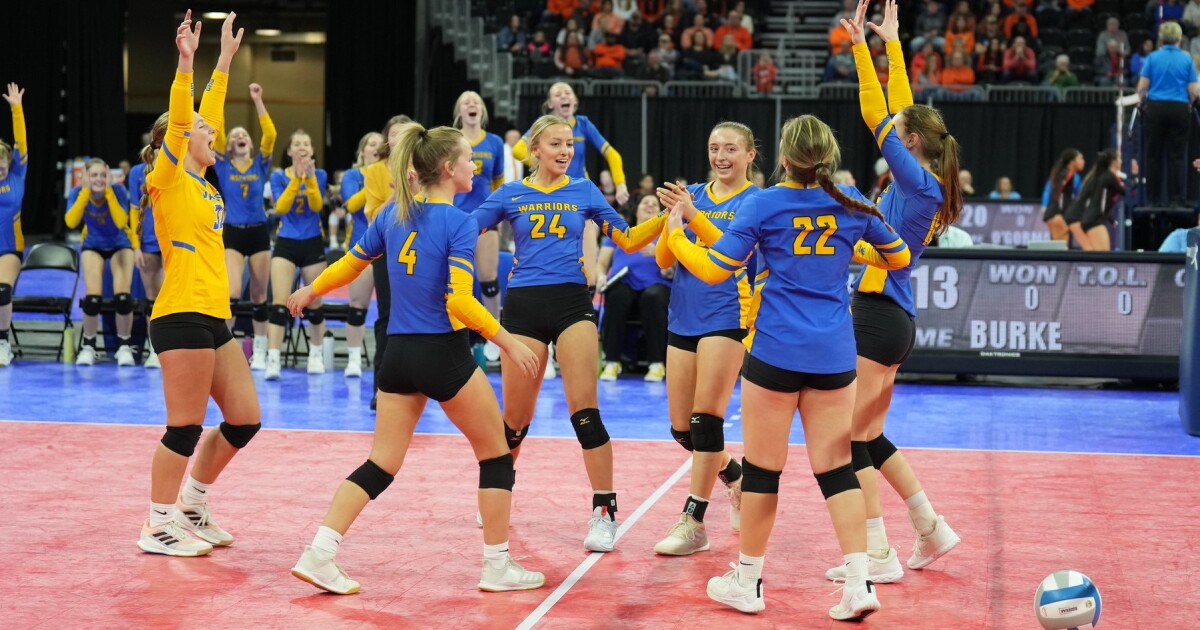 Castlewood made their first state volleyball championship appearance this year since 1997, and the Warriors finished sixth in the “B” tournament. While that alone is something to celebrate, it’s the challenges the team has faced this season that truly show the strength of the community, school and team.

Last May Castlewood was hit by a severe storm that triggered a tornado. While many South Dakota communities suffered severe damage from this system, Castlewood suffered extensive damage, including damage to its school and one of its two gyms.

Additionally, the Warriors’ volleyball program was going through a transition, with Breanna DeKam as the freshman coach this fall.

“It was definitely a very scary experience, and you don’t know how to react to something until you’re in the moment,” DeKam said. “It’s going to be a lot of time to rebuild but everyone is so supportive. We keep saying we are Castlewood Strong, and we are.”

Raised in Castlewood, DeKam played volleyball for the Warriors in high school and was an assistant coach for four years before being named head coach for the season.

“I’ve always loved volleyball. I had four different coaches in high school, so that kind of motivated me to come back and bring some stability to the program,” DeKam explained. “And I love Castlewood.”

The May tornado made it difficult to even find space to practice ahead of the season. Children from Castlewood would make trips to surrounding communities like Watertown during the summer months just to find a gym. And as the season drew closer, there were more questions of uncertainty.

“At the start of our season, we didn’t even know if we could be in our gym,” DeKam said. “Could we play at home? Luckily we could but there was a lot of uncertainty and the girls handled the adversity really well.”

“In the beginning we initially wanted to use the Estelline School, but then all our buses were empty. So we had no way of taking the kids with us,” explained Angela Keszler, Castlewood’s athletic director and principal.

Another hurdle was the fact that the school did not have home locker rooms year-round.

“You might be like, ‘Oh, that’s no big deal,’ but the girls getting together and talking before the game, getting hyped before the game, it was just really weird to go into that aspect,” explained coach DeKam. “We were lucky it hit one of our gyms and not both, that’s the biggest thing.”

The Warriors went 19-7 in the regular season and then defeated De Smet and Arlington in the Regionals before defeating Tripp-Delmont/Armour in the SoDak 16.

“It was so important for us to win this SoDak 16,” said DeKam. “We have been working towards this goal for the past five years. Since I joined this program we have been very close for a few years and finally coming here is a blessing for us. It was very uplifting. After something so difficult for the whole city. To have something to look forward to again and something to be proud of I think was very uplifting for our city.”

In addition to Castlewood’s volleyball, which will be announced this week, the school also began the transition to bring some of its younger children back into the school’s attached classrooms.

“So we sent the volleyball team away on Wednesday. We didn’t have school on Thursdays and Fridays because we moved from the churches to our finally completed mobile units,” said sporting director Keszler. At the moment my primary school teachers are at home preparing their classrooms so they can start with our children on Monday. I have my 5thth class up to 12th Class in the main building since school started. We actually started on our start date. My elementary school kids started attending churches two weeks later. So we were in the basements of churches, and not all of them have basements, but in the churches since September 6thth.”

Castlewood narrowly lost 3-2 to Burke in Thursday night’s quarterfinal round, and then they rallied to beat Colman-Egan 3-1 in the consolation round. On Saturday, the Warriors fell 3-0 to Northwestern, which put Castlewood in 6th placeth for the tournament.

“I think the main thing is that these kids found out a little bit about life and how to prioritize things and how to be thankful for the opportunities we’ve been given because sometimes you just don’t know when that can change .” Keszler tells. “We’ve had a couple of kids with injuries this year and I’ve seen those kids have resilience. Like I said, that’s the word that keeps coming to mind because even [Thursday] Night, these girls, they lost a tough match, and they came back ready to go again [Friday]. It just shows you they’re just some kind of comeback kids and I’m just so proud of them all.

Coach DeKam also praised the strength and attitude of her team. She said these kids are a prime example of how special the Castlewood community is.