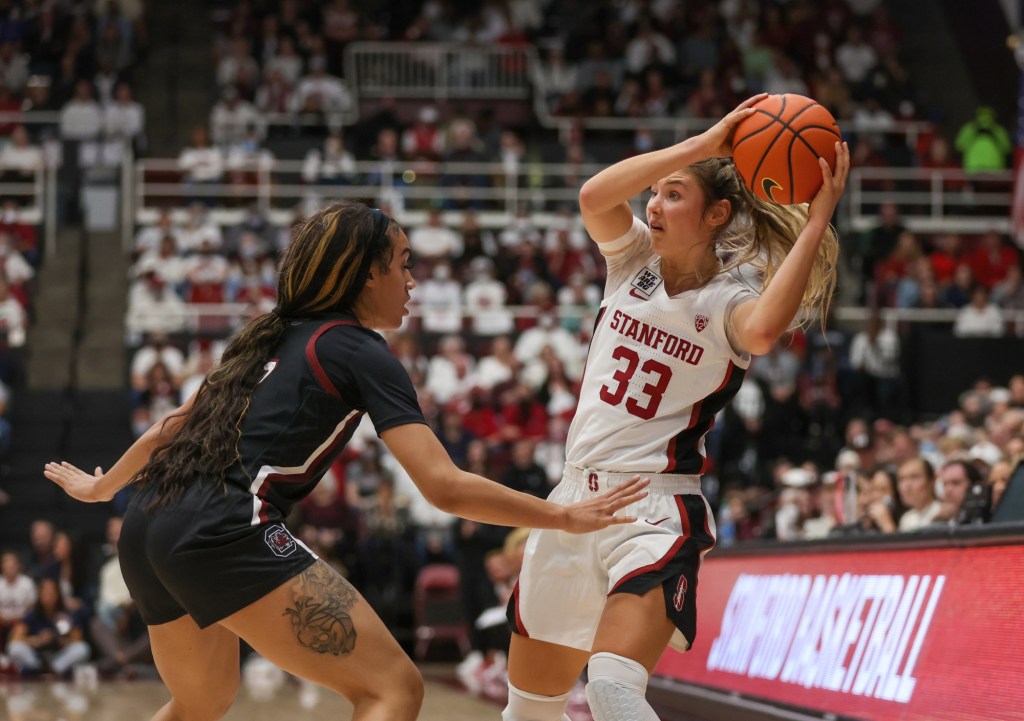 STANFORD — The matchup between the country’s top two teams more than lived up to its hype.

But the Cardinal’s long history of struggling in matchups between the country’s top two teams added a new and particularly painful chapter on Sunday.

No. 1 South Carolina achieved a 76-71 victory in overtime over No. 2 Stanford in front of a sold-out crowd at the Maples Pavilion, which brought the show to fans in the building and at home.

“I think that’s what women’s basketball is and was about,” said South Carolina head coach Dawn Staley. “Now is the time for the product we’re putting on the floor to be seen by as many eyes as possible.”

Stanford was never behind and led by 10 points after three quarters, but South Carolina pressed defense and pulled back to force overtime, with reigning international of the year Aliyah edging Boston’s mid-range touch jumper by 2.1 seconds scored the equalizer in the end. The Cardinal flipped the ball on his inbound pass to send the game into overtime.

South Carolina didn’t take their first lead of the game until two minutes after overtime when they scored two free throws. The extra frame saw teams trade the lead for multiple possessions, but with the Cardinal losing one, Haley Jones had her shot blocked with 1:10 left and South Carolina’s Bree Hall hit a 3-pointer with 41 seconds left. to oust the lead to four.

Sophomore Kiki Iriafen hit two free throws to reduce it to two and the Cardinal forced a turnover to get the ball back with 10 seconds left. But the Gamecocks’ smothering defense forced a five-second injury before the Cardinal could throw in the ball.

South Carolina missed both free throws with five seconds left and Iriafen grabbed the rebound, but she called a timeout when the Cardinal didn’t have one. It was the final of 22 turnovers committed by Stanford on Sunday.

“I think that was an unfortunate slip…it’s not a mistake, but it’s the combination of turnovers, not getting the ball down, taking a time out, not boxing out,” VanDerveer said. “It’s an overtime game but we need to be hungrier.”

Cameron Brink shone for Stanford while on the floor, scoring a game-high 25 points on 8-of-13 shooting and scoring six of Stanford’s seven points in the fourth quarter. But the junior struggled with foul problems throughout the game, fouling 3:01 in overtime.

VanDerveer said she thought senior Haley Jones was struggling and said the Mitty alum could “do more for us.” Jones, who had 11 points on 5-of-19 shooting (including four blocked shots), nine rebounds, six assists and four turnovers while playing all but 89 seconds of the game, agreed with the assessment.

“I could have finished more,” Jones said. “I think they did a great job defensively … but I think there was a lot we left out there on the court that we wish we had back.”

Stanford mostly did a good job to contain reigning international of the year Aliyah Boston for three quarters – helped in part by Boston, who ran into early trouble and played just 5.5 minutes in the first half. But Boston kept working on the color, finishing with a 14-point, 13-rebound double-double, showing why she’s so highly acclaimed.

“Aliyah is going to be the number one draft pick,” VanDerveer said while sitting next to Jones, the suspected No. 2 draft pick in the next WNBA draft. “She’s hard in there. She’s really strong and aggressive. I think that’s a great person for the people on our team – Kiki and maybe [freshman] Lauren Betts — to really watch and say, “This is what I have to do.”

The Cardinals are now 1-10 when playing in matchups between the top two teams in the AP poll of all time and have lost two straight to the Gamecocks. Last year, the Cardinal led in Columbia by as many as 18 points but collapsed in the second half when South Carolina rushed back to inflict a 65-61 loss on Stanford.

Sunday’s showdown — the 34th between the No. 1 and No. 2 teams on the AP poll since 2000 — was only the second regular-season women’s college basketball game to be televised on ABC. Both programs used the spotlight to continue to raise awareness of Brittney Griner’s imprisonment in Russia, with each team sporting “WE ARE BG” patches and both Staley and VanDerveer wearing jerseys honoring Griner.

“Brittney, she’s part of our basketball family. And she’s fighting for her life,” Staley said, adding that she went to Stanford’s Hall to join the fans who wrote Griner a letter. “I think there’s a trailblazer up there that will pave the way for her to get home a lot sooner than a lot of people expect. I am someone who is optimistic and prayerful that she is coming home soon.”

Stanford will continue to be in the spotlight during the regular season, especially when Tennessee comes to Maples for another game on ABC next month. But even after the loss, Brink and Jones feel the cardinal has no reason to reconsider Sunday.

“The first thing I said as I walked into the dressing room was we have nothing to hang our heads about. We made a lot of mistakes, but we’re a young team,” said Brink. “It was just a great experience for us…just playing through stuff like that. I think we did well but there are a lot of things we can learn from.”

Jones added: “Broadly speaking it’s November. It’s our first defeat. So I think there is still a lot in the tank for this team.”