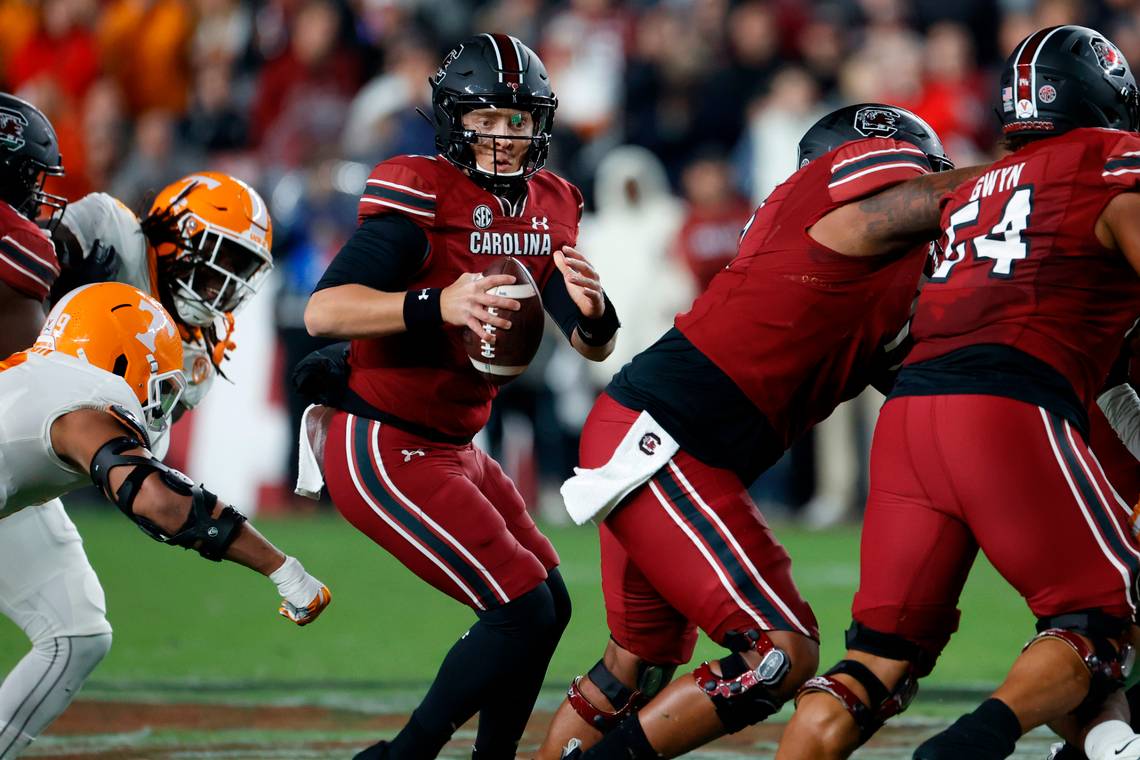 South Carolina got away with a surprise 63-38 win over No. 5 Tennessee at Williams-Brice Stadium on Saturday. The win over the Volunteers was the Gamecocks’ first win against a top-five team since USC defeated No. 4 Georgia in Athens in 2019.

Here were the ups and downs for South Carolina on Saturday.

Quick Start: South Carolina took an early lead by scoring a touchdown on their first drive of the game. The Gamecocks found the end zone on their first five possessions and scored 35 points at halftime. The team never fell behind, forcing the Volunteers to ramp up their offense and play from behind.

USC had not scored 30 or more points against a top-five team since 2018, when it lost to Clemson.

Big Pass plays: USC has had passing game problems at times this year, but blew a flurry of big games through the air on Saturday. The team finished with nine passes for 20 yards. The longest was a 60-yard touchdown pass from Spencer Rattler to Josh Vann. Vann caught another from Rattler that went 18 yards.

Junior tight end Jaheim Bell recorded his first touchdown catch of the season in the first quarter and another in the fourth quarter.

Rattler finished the game with 438 passing yards and six touchdown passes, both of which were career highs. The six passing TDs was a single-game program record.

Wells brings the juice: Antwane “Juice” Wells Jr. has been the team’s lead receiver all season, and he showed why on Saturday. Wells finished the game with a season-high 11 catches for 177 yards and provided the team with timely receptions that lengthened drives. It seemed all of his catches came when the team needed a boost on offense.

He also rounded out his stat line with a quick touchdown and scored a straight handover in the third quarter to improve the team 11 points.

Offensive Creativity: South Carolina took a step forward with their offensive play against Tennessee. The team often placed Dakereon Joyner as quarterback for run plays, where he sometimes orchestrated the read option. Joyner even threw a pass to Rattler in the red zone, and the Gamecocks scored a touchdown a few games later.

South Carolina also had success running the end-around game. While the team fired more shots on the field, they also found ways to get under Tennessee’s defense and gain yards after catches.

USC was without a workhorse running back MarShawn Lloyd and also Christian Beal-Smith, so it had to find new ways to get yards.

Nick Emmanwori tagged for targeting: The team lost first-half freshman safety Nick Emmanwori to a well-aimed penalty. He was ejected after officials noticed he was leading with the crown of his helmet as he tried to make a tackle in the second quarter. Redshirt newcomer Peyton Williams stepped in for Emmanwori. The team’s runners-up has struggled with injuries all season and resorted to another young defender on Saturday.

Keeping up with the pace of UT: The Volunteers are known for their high-speed offense, and South Carolina got a taste of that on Saturday. While South Carolina took an early lead, Tennessee still managed to score 24 points in the first half with points on four of their first five drives. The team eventually withdrew despite the volunteers’ early success.

Fans throw debris: South Carolina fans threw water bottles onto the field in the third quarter. They disagreed with a face mask penalty against Cam Smith. The game before that call, Smith was called out for pass interference, another call fans weren’t happy with.