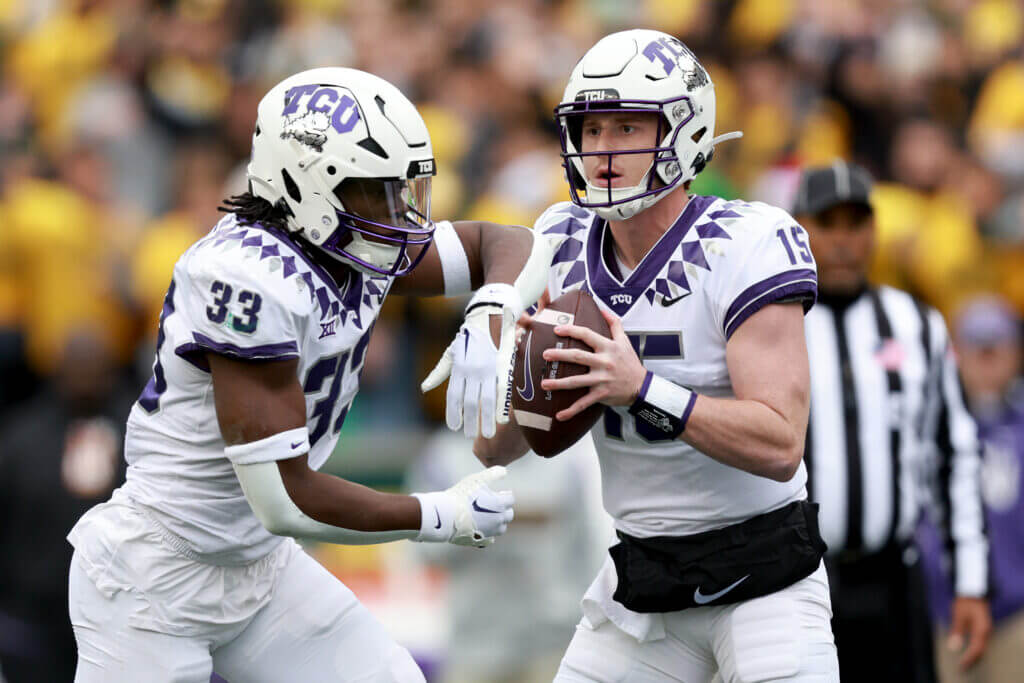 In the discussion surrounding the college football playoffs, there was a general feeling that TCU is lucky to be there and that a loss will take out the Horned Frogs. But that shouldn’t be the case.

Undoubtedly, TCU needed a string of comebacks in the second half to win, none more notable than the field goal that won the Fire Drill game to beat Baylor on Saturday. But that goes back even further. Last week, ESPN’s Stephen A. Smith fired the Frogs, saying they hadn’t played anyone and “competition counts.” He read the schedule and said it doesn’t deserve a top 4 finish even if it’s undefeated.

There were a lot of reactions because that’s the point after all. But Smith was not alone. Paul Finebaum in the same segment agreed, downplaying the quality of the Big 12.

What Smith, Finebaum and others have overlooked is that the Big 12 is the deepest conference in the country. Eight out of 10 teams are bowl eligible. There are no pushovers, and the nine conference games are more than the SEC or ACC. Among the CFP top 4, TCU has the strongest forward strength in several ratings, including ESPN’s FPI and Sagarin. The Horned Frogs are #1 in ESPN’s record strength, which ranks the odds that the average top-25 team would have the same record against the same schedule.

An undefeated TCU will make it into the CFP. We know that. The conversation we should be having is whether or not a one-loss TCU should step in.

All in all, the place to ding the frogs is that they’re missing a real marquee win. Georgia beat Oregon and Tennessee. Ohio State and Michigan beat Penn State. Every team that defeated TCU has at least three losses. This is partly due to the depth of the conference. But if you want to prove you can beat a top team, TCU didn’t and won’t have a chance. (Michigan and Ohio State will try to prove it against each other.) That could ultimately be what keeps TCU out if they don’t win the next two games.

But what can’t be said is that TCU didn’t play anyone. Can’t say it didn’t deserve those victories. After a weekend in which Georgia, Ohio State and Michigan all battled vastly inferior opponents, perhaps a late-November comeback in Baylor proved the Horned Frogs belong.

Here is this week’s edition of the athlete 131

There is no change in the top 4 and the moment of truth is here. After Michigan escaped from Illinois, I figured I would finally take Ohio State to the top. Then the Buckeyes had to flee against Maryland. Any argument you can make about these two teams has its points. Ohio State has a better second win (Notre Dame) while Michigan didn’t play anyone in the nonconference. Michigan crushed Penn State while Ohio State needed a comeback in the fourth quarter. Ohio State’s struggles under certain conditions make me think this could be a repeat of last year when Michigan’s toughness in the trenches triumphed. But now Wolverines running back Blake Corum could get hurt, and quarterback JJ McCarthy wasn’t very good. I’m not sure Michigan can win a big game with his arm.

I’m still leaning slightly toward Michigan, but now it’s finally being decided on the field and we can keep arguing about whether the loser should be in the CFP. 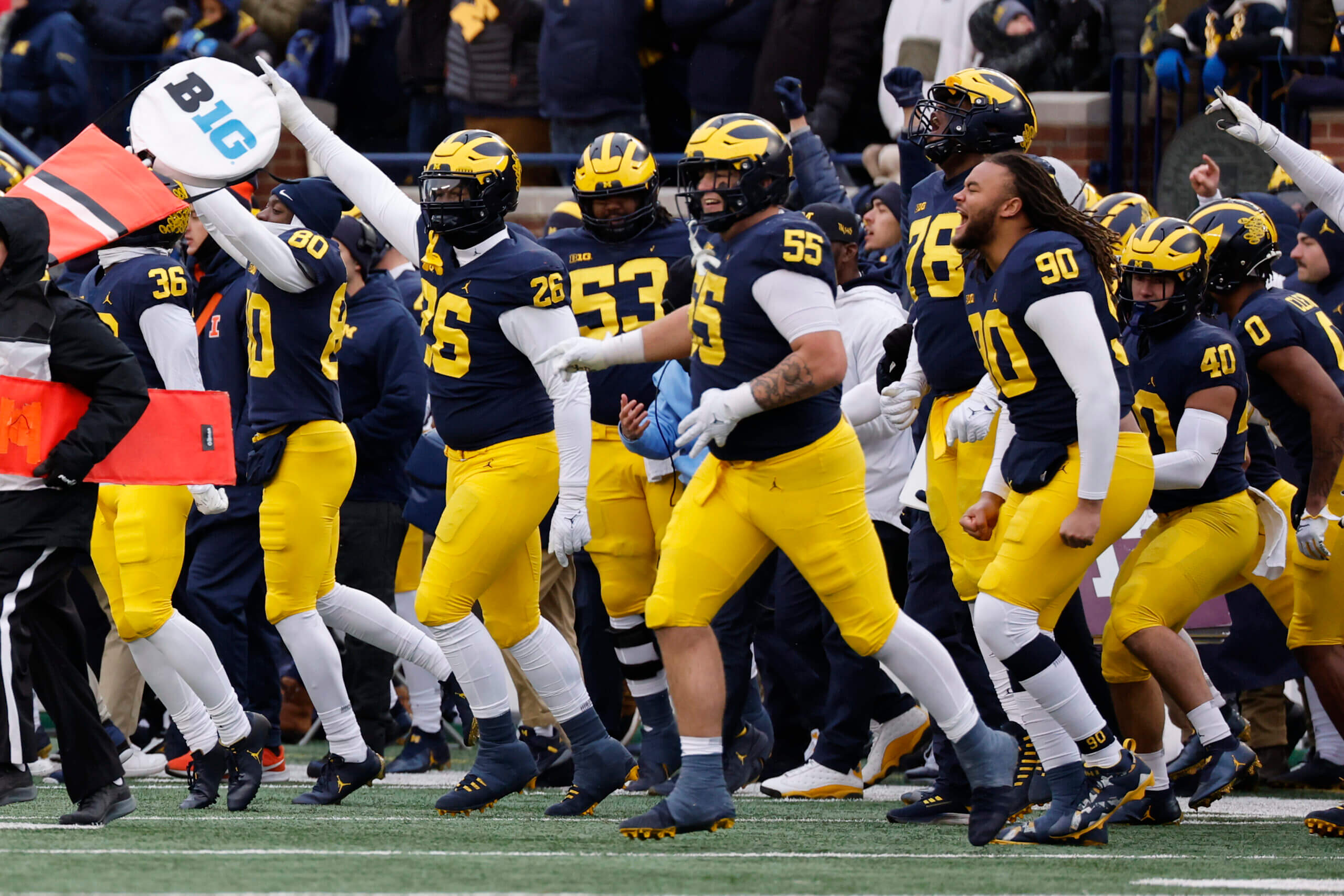 Michigan held on to an unbeaten record ahead of the Ohio State Game. (Rick Osentoski / USA today)

USC finally got a marquee victory, beating UCLA 48-45, putting the Trojans ahead of LSU. The Tigers have wins against Alabama and Ole Miss and the schedule is tougher. But USC doesn’t have a one-sided loss, and the Oregon State win on the road is valuable. However these two teams still control their destiny for the CFP I believe.

Clemson jumps to No. 7 due to Tennessee’s lopsided loss to South Carolina. The loss to Notre Dame still holds Clemson, but the Florida State win has gotten better with time.

Tennessee’s 63-38 loss to South Carolina makes the Vols a very difficult team to place. They’re out of the CFP race, but wins over LSU and Alabama keep them from falling further behind. The only other change is that Washington moves up into the top 10 after Utah’s loss to Oregon.

Penn State is an odd team, too. The 9-2 Nittany Lions have seven stunning wins, but they face relatively weak competition. None of the wins stand out. They were abused in Michigan but played hard in Ohio State. Oregon stays ahead of Penn State because it has two marquee wins over Utah and UCLA. Notre Dame keeps rising and Clemson’s rise makes Ireland’s win even better. The Irish also went ahead of Florida State because of the Clemson results between them.

The Group of 5 New Year’s Six spot will likely still go to the American Athletic Conference champion, but it’s about time Coastal Carolina, UTSA and Troy were also recognized for their seasons.

Illinois stays on after the narrow loss in Michigan because of the effort and because of other results across the country. UCF falls out of the top 25 after losing to Navy but stays ahead of Cincinnati because of the neck-and-neck race. That could change when Cincinnati and Tulane meet this week. Iowa is back and controlling its destiny in the Big Ten West after beating Minnesota. Kirk Ferentz is doing just enough.

South Carolina is another hard-to-place team. The blowout win over Tennessee is one of the most impressive of the season, but the Gamecocks were also beaten by Florida last week, losing to Arkansas earlier in the season. The Razorbacks lag behind Liberty because of the head-to-head loss.

Oklahoma is ahead of Oklahoma State after Bedlam’s 28-13 win on Saturday. Boise State’s victory in Wyoming secured the Mountain Division and the Mountain West’s home field in the league championship game. The Broncos are 6-1 from a 2-2 start when they fired their offensive coordinator and QB Hank Bachmeier entered the transfer portal. They figured things out, but losses to UTEP and BYU still hold them behind other Group 5 teams.

Wisconsin snuck into bowl qualifiers for the 21st straight season with a 15-14 comeback win over Nebraska. It wasn’t pretty, but it looks like Jim Leonhard will probably get the full-time job. Houston defeated East Carolina 42-3 and continue to be one of the most contradictory teams in the country. James Madison is 7-3 in his first FBS season, but it doesn’t qualify for the postseason as an FCS transition team. However, the Dukes can still win a share of the Sun Belt East if they beat Coastal Carolina this week.

Iowa State lost 14-10 to Texas Tech and will miss a bowl game. The Cyclones are 3-11 in one-possession games for the past two seasons. SMU has conceded 145 points in its last three games, including 59 in Thursday’s loss to Tulane. Wyoming’s narrow loss to Boise State doesn’t let the Cowboys fall far. Appalachian State and Georgia Southern will play in their rivalry game for bowl eligibility next week as App State is not yet eligible as it has two FCS wins. Texas A&M overtook UMass in another uninspiring performance. How about Vanderbilt? The Commodores have defeated Kentucky and Florida in consecutive weeks.

Fresno State turned its season around in a big way, winning the West Division of the Mountain West with a 41-14 win over Nevada for a sixth straight win. San Diego State has won five of six (the loss went to Fresno State), and quarterback Jalen Mayden has given that offense a boost for the first time in a long time.

Miami had nine yards against Clemson at halftime, losing 40-10. The Canes must beat Pitt to advance to a bowl game. Georgia Tech defeated North Carolina 21-17 and Brent Key is 4-3 as interim head coach with two top-25 wins. Ohio’s rebound continued with a 32-18 win over Ball State and the Bobcats are a win away from the MAC East, but the status of injured quarterback Kurtis Rourke is crucial.

Cal beat rival Stanford 27-20. UConn lost to Army 34-17 and will have to wait and hope for a bowl selection. FAU lost 49-21 to Middle Tennessee with bowl eligibility at stake and must beat WKU next week. Rice (at North Texas) and UTEP (at UTSA) also need surprises next week to get to bowl games and maybe save their coaches’ jobs. Indiana beat Michigan State 39-31 in double overtime, though he outplayed heavily, completing just two passes. Virginia Tech ended a long losing streak with a 23-22 win at Liberty. UNLV started the season 4-1 but has lost six straight games after a 31-25 loss in Hawaii, ending its bowl hopes.

Bowling Green was allowed to bowl with a last-second touchdown at Toledo in the snow in a wild finish. The Falcons are still in contention for the MAC East title if they can beat Ohio. Buffalo’s game against Akron was snowed in and could affect MAC East’s tiebreaker. Navy beat UCF and Army beat UConn, both doing so without completing a pass. Neither academy will have a bowl game or the Commander-in-Chief trophy to compete for (because the Army has two FCS victories and the Air Force has won the CIC), but this rivalry game is always special. The middle of the MAC continues to have a lot of parity. UMass fought valiantly against Texas A&M and covered the spread with a 20-3 loss, but it wasn’t enough to move them from last place.