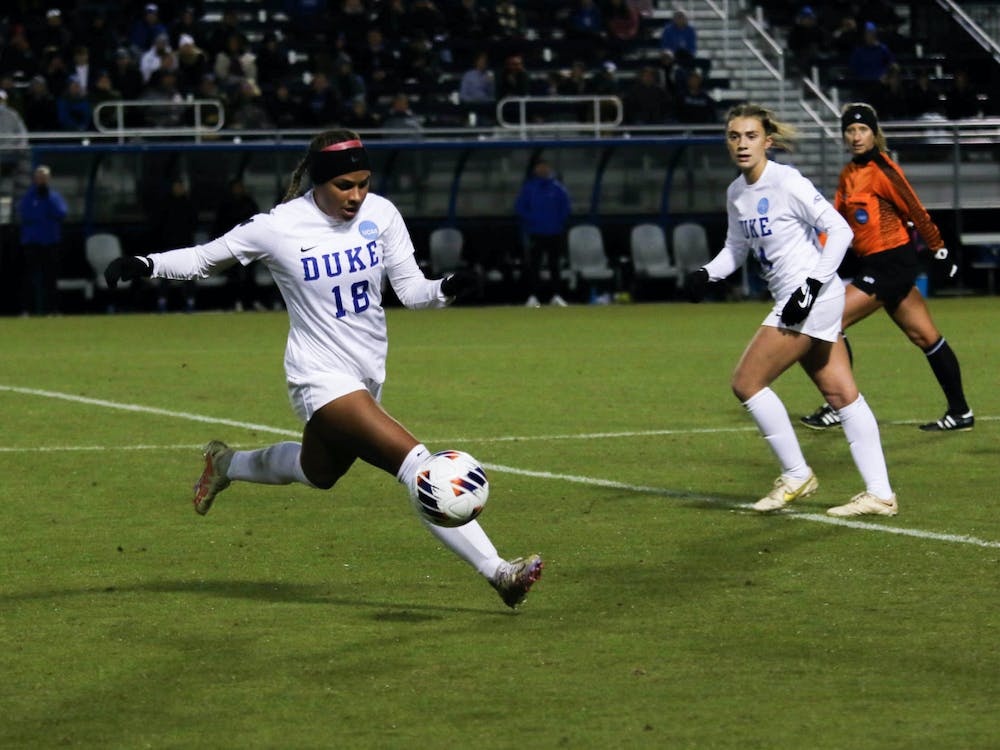 Just as the darkness and 33-degree temperature at Koskinen Stadium suggest, winter is coming. Cheers erupted from both the Blue Devils and visitors as Duke, in ice white uniforms, hosted the red-clad Gamecocks. Though no snow fell on the field on Sunday, the Blue Devils were like ice as they turned out a fiery South Carolina team and limited almost all of their opportunities.

A 2-1 win over the visiting team in the third round of the NCAA tournament earned the Blue Devils their ninth Elite Eight in 11 years, the round in which they lost to Santa Clara last season. The No. 2 seed Duke got off to a strong, fast start against the third seed Gamecocks. The team has shown improved offense since their emphatic win over Texas two nights earlier, as well as defensive strength that will be crucial in the future.

“I thought it was a really good performance,” said head coach Robbie Church after the game. “I felt we were very focused and worked extremely hard throughout the game.”

In the 84th minute, second striker Michelle Cooper scored her second goal of the evening against an empty Gamecock net. At 2-0, it was clear that Duke had secured his ticket to the next round. And Cooper, whose goal marked her 45th point of the season, broke a school record and surpassed Laura Weinberg’s record of 44 in a single season from 2012.

From the start, the Gamecocks didn’t mess around; They had chances close to goal before the first minute was up. Rapid tactical changes worked in the Blue Devils’ advantage in the second minute as new forward Kat Rader got Duke’s first chance to score, but her shot was blocked by Gamecock goalie Heather Hinz before she could get there.

Duke’s second big offensive chance came in the eighth minute. Cooper made her first shot, a narrow miss that narrowly missed the net. Obviously, the Blue Devils had the offensive looks they needed to win.

And that was shown just after 11:44 into the contest when the Gamecock transition accidentally fed the ball to Rader. In the blink of an eye, she passed it to Cooper, who then rolled it to a blank spot above for older midfielder Delaney Graham. Cooper and Rader continued on goal as Graham saved the ball from going wide and kicked it across the box. In an attempt to clear, Gamecock newcomer Gracie Falla kicked him backwards, where the ball reached Cooper’s right foot instead. With a quick shoe from the second student, the ball landed in the net and the game was 1-0.

“We are a good transition team. This is such a good team to remember in transition,” Church said. “… A number of players can run and move forward and make good decisions, and [be] unselfish in transition.”

Duke’s starters played all of their roles perfectly, with quick adjustments being the name of the game. That proved consistent for the Blue Devils, who maintained 61% possession throughout the game and lost the ball in a flash to South Carolina.

South Carolina intercepted a pass in the 27th minute and created their first major attacking opportunity as it was a half where the Blue Devils held most of the possession. However, the Gamecocks struggled to hold their own. A South Carolina player shot the ball deep into Duke’s defensive third, where it caught goalie Ruthie Jones and was quickly returned.

“I felt like we were really patient; we let them jump to us,” Church said. “And as soon as they jumped, we slipped into the pocket and got the balls. And then – we looked at our attack.”

By the end of the first half, Duke had a 10-1 shooting advantage thanks not only to his possession advantage but also to his speed. But in the second half, the Gamecocks, coming back from the dressing room stronger than they had in the first 45 minutes, had closer chances.

South Carolina practically connected Duke with the Blue Devils’ nine with eight shots in the second half. And with the impatience of the Gamecock faithful present in the form of loud shouts and shouts, South Carolina ignited its offensive. The visitors alternately beat Duke in the 59th minute and Gamecock forward Catherine Barry fired a shot on goal that was deflected off a Blue Devil defender. Then a foul by young defenseman Emily Royson awarded the Gamecocks a free kick, but it went high wide on target.

After all, South Carolina didn’t leave Durham empty-handed. With 1:25 left, the Gamecocks scored their first goal from an interception in transition. Gamecock senior Riane Coman matched with teammate Payton Patrick, who jumped at the opportunity. With less than 90 seconds remaining, South Carolina played to the end, but the Blue Devils held on until the horn blew in their favor.

“I think we’re just trying to keep the team calm and collected at this moment. Obviously you don’t want to score, especially in the last three minutes of the game. But I think we all knew that we could be stuck in the moment, do the right things, get our work done, take the ball to the corner, run the game; we would be good,” said midfielder Mackenzie Pluck. “I had faith in my team.”

With the win, the Blue Devils remain one of five dominant ACC teams en route to the Elite Eight. Duke’s next challenge in his College Cup quest takes him to Tuscaloosa, Alabama for a Friday matchup against No. 1 seed Alabama.

Get The Chronicle straight to your inbox

Sign up for our weekly newsletter. Cancellable at any time.

Ana Young is a second-year Trinity student and Blue Zone Assistant Editor of Volume 118 of The Chronicle.