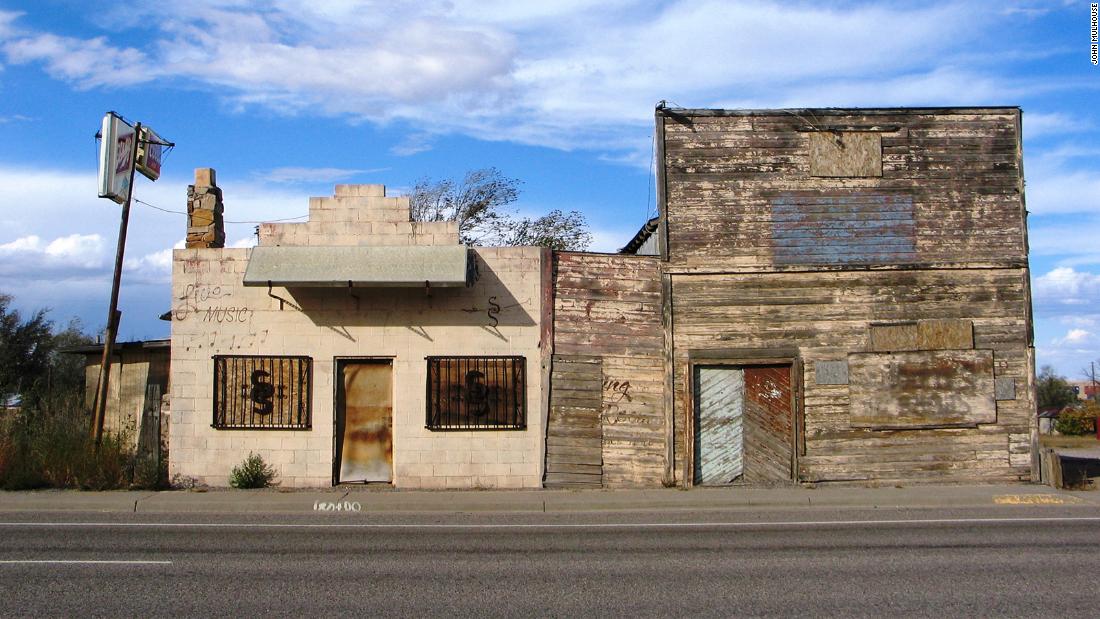 But while some people see these two interests as divergent, Mulhouse believes they’re related.

“As a biologist looking at nature, there’s a fact that people have to live in different ways, and sometimes they have to do it very quickly,” he says. “The way we live now is not how we might live tomorrow.”

Mulhouse began his photography project in the mid-2000s while attending graduate school in Georgia.

He began photographing interesting abandoned or vacant buildings along the Georgia-South Carolina border. He soon posted them online on a blog called City of Dust.

Eventually, as habits of online media consumption changed, he moved much of his work to a Facebook page. Fans and other history buffs followed. In the comment sections, Mulhouse says, people would share memories of growing up in different cities, then tag friends and family to fill in more details.

City of Dust accompanied him as he roamed the United States. Though he no longer lives in New Mexico, Mulhouse still considers the Land of Enchantment his favorite state, citing its Native American and Spanish history.

“I think it’s the least like the United States, of pretty much every state in the country,” he explains.

He cites Chaco Canyon and Pecos Pueblo as two of his favorite places to visit and photograph in New Mexico.

And while Route 66 draws visitors from around the world, Mulhouse prefers to take Highway 60 — which runs through central New Mexico and drops off into western Arizona — where you can “just go back in time.”

How to define “abandoned”

First things first: what qualifies a place as abandoned anyway?

“In most ‘ghost towns’ some people still live. When someone turns to you, you need to say a few words to them. It helps to know your story before you go so that in that case you can say, ‘I’m shooting this and that store. I’m photographing this old church.” That’s where you start a conversation and you often learn a lot.”

Buildings are abandoned for many reasons and Mulhouse is always trying to figure out why.

And it’s important to ask how a place was abandoned in the first place.

The town of Springer is home to one of his most commented images: the Mills Mansion.

It was built in the 1870s by Melvin Mills, a member of the infamous Santa Fe Ring. Mills won, then lost his fortune, and then his home. Today he has a couple of descendants who want to fix up the house and turn it into a tourist attraction, but don’t have the money to do so.

Another popular building, a 1920s former general store, was bought by a young couple who hoped to clean it up and convert it into an Airbnb, but eventually abandoned the project.

Increasing urbanization plays a major role. It can become a chicken-and-egg situation: tourists would come and spend money if there was something to visit, but small businesses need the money before they can even open to tourists.

Mulhouse is not interested in blaming people for moving away from small towns.

After all, he’s still a biologist and knows that climate change affects where and how people live.

Some places are abandoned when a factory closes and people go to work elsewhere. Sometimes the devastation caused by a hurricane or an earthquake makes a place unsafe to live in.

“I think ghost towns say a lot about the past. But the more I think about them, they also say something about the present and maybe even the future. There’s a lot to think about in terms of change and people’s vulnerability.”

Ultimately, Mulhouse says, the internet is a place where people with unusual interests can find each other and form a small community. City of Dust has become as much a home as any house or apartment he has ever lived in.

Niche Facebook groups are rebuilding the small towns, though the buildings that made them up are gone.

“I try to still be the person who’s happy when five people are interested,” he says.

“There’s really something about loneliness and a little bit of melancholy and thinking about how people’s lives were and they came and went and these were places that people loved and now they’re not here.”

But thanks to Mulhouse, they are.