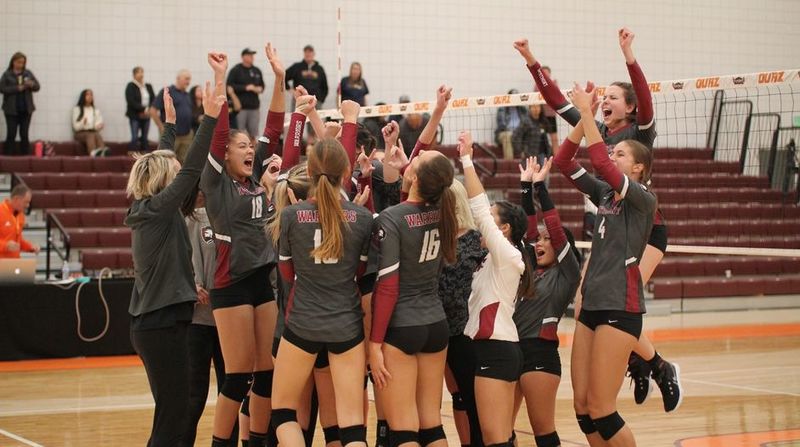 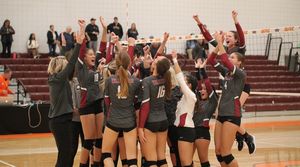 (BUTTE, Mont.) Westmont Volleyball (23-6) secured a final trip to Sioux City, Iowa Saturday night after beating the Montana Tech Orediggers (24-9) in three straight sets to secure the NAIA opening round to win. With the victory, the Warriors advance to the final venue of the NAIA National Championship where they will fight for the red banner one last time.

“The team played great tonight” said Westmont head coach Ruth McGolpin. “We jumped up and down for joy when the last point was scored. Going one last time in our senior year in NAIA is special. We will enjoy the moment and look forward to getting to work after Thanksgiving.”

All-GSAC Star Phoebe Minch led the way for Westmont as she racked up 11 kills with a tie for the team and 20 digs with a game-high. Jessie Terlizzi also garnered 11 kills while Taylor Distelberg added seven of his own to reach six blocks at team level.

“Phoebe’s pass was spot on and her attack was the best on the team.” remarked McGolpin. “She played smart, her serve was excellent and overall it was just a great performance for Phoebe. Jessie also came up with some monster kills when we needed them and her pass was excellent tonight too.”

In the first set, Westmont took control after a tie-to-11 after an Oredigger service error that preceded kills from Minch and Sarah Krueger. Leading 14-11, Westmont never allowed Montana Tech to tie the set again. The lead held steady and in the end Minch’s fifth kill of the set gave Westmont a dominant 25-20 win.

The evening’s must-see show came in the second set when Westmont faced a 17-12 deficit at one point. At this point, consecutive kills will decrease Ashley Bowell sparked a 5-2 run that saw Westmont slip back within a pair at 19-17. Nevertheless, the Orediggers kept the Warriors at a distance for a few more minutes and eventually took a 24:21 lead.

Minch lost three and her last life in set two, hitting a kill that sent her down 24-22 on the service line. Then kills back to back Jessie Terlizzi knotted the set at 24 and sent a bolt of lightning through the street bench.

Later, with the set tied at 26, a kill from Boswell followed by an Oredigger attacking error capped a spectacular 28-26 win that drew Westmont to within a set of Final Site.

“With a minus of 24-21 we made some moves Alexis Denick come in for Ashley Bowell,” McGolpin pointed out. “We had to block and she, along with a few others, came up with some key blocks and some big defensive plays. We did several scramble games and had some serious momentum swings by the end of that game. I loved it.”

In the third and final set, Westmont built up leads of 10-5, 19-13, and 23-15. Still, Montana Tech opted to swing down when the Orediggers went on an electric 8-0 to tie the set at 23. However, the Warriors never wavered. First, a Distelberg kill gave Westmont a 24-23 lead, and finally Krueger’s fifth kill of the game gave Westmont a 25-23 win, sending them to Sioux City for the last time in program history.

“We had a huge lead but they just fought back” confirmed McGolpin. “In the end it was a great shot from Taylor to put the ball in the deep corner and a perfect shot from Sara to end the game. It was the perfect set at the right time.”