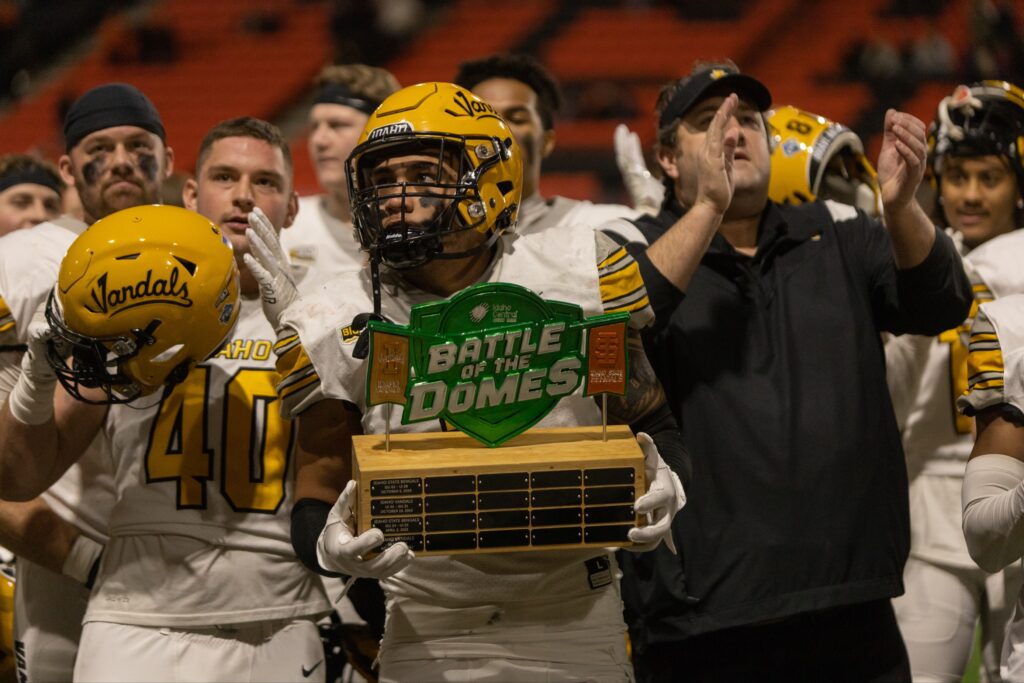 After a 38-7 victory in the Battle of the Domes, the Vandals returned home to see if they qualified for the playoffs.

The top eight teams were announced and it was now time to see if Idaho would receive a general offer. The next six were called, and with two spots remaining, head coach Jason Eck expected an Idaho call.

“That was the biggest thrill because I wasn’t sure if we’d be there,” said Eck. “I thought we were going to play against Weber. When I saw that we didn’t make it back then, I got a little nervous.”

Weber State was the last team to be announced in the first batch of teams at large. They will face North Dakota for a chance at a rematch against Montana State.

After a commercial break, it was time for the final eight. First announced was the state of Southeast Missouri in Montana.

“When Montana did it, I felt a little better,” Eck said.

Cheers erupted in the room shortly after Montana was called. Despite not getting a home game, the Vandals were in the FCS playoffs for the first time since 1995 (their last season at the FCS level in 20 years).

One of those seniors is linebacker Fa’avae Fa’avae, who joined from rival Washington State after the 2019 season.

“It was just great,” said Fa’avae, who still had a black eye from last night. “It’s been such a fun journey since Coach Eck and the staff came on board.”

Fa’avae has had a great career in Idaho, totaling 217 tackles in 25 games. He’s also forced four fumbles and sacked quarterbacks 3.5 times for a total loss of 40 yards.

The Vandals will be happy to have Fa’avae in their secondary as SE Louisiana has accumulated plenty of points this season. After starting the season with 24-7 and 42-9 losses, they turned it around with a 70-6 win over Central Connecticut State. From there, they beat seventh-seeded University of Incarnate Word 41-35 and Murray State 48-14. A week after their dominant win, they suffered a tough 31-28 homecoming night loss to Texas A&M-Commerce. However, this would be their last loss of the season.

Senior running back Carlos Washington Jr. is fifth in the Southland Conference in rushing yards with 586 yards and second in touchdowns with 11. Their dual quarterback system includes redshirt freshman Eli Sawyer and senior Cephus Johnson III. Sawyer has the fifth-most passing yards in the conference with 1,605 yards while Johnson III is sixth with 1,146 yards. Sawyer is also the second largest percentage of completion at 64.7% and Johnson III is third at 62.4%.

Leading the Vandals are freshman RB Anthony Woods and senior RB Roshaun Johnson. Woods is fifth in the Big Sky Conference in yards with 814 while Johnson is fourth in touchdowns with 11.

Leading the air is redshirt newcomer QB Gevani McCoy. Although he missed out against the Bengals through injury, one of the conference’s top passers should do well against the Lions. McCoy has completed 68% of his passes, which puts him second in the conference. His 2,376 passing yards and 25 passing touchdowns were fifth and first in the conference, respectively.

Redshirt freshman wide receiver Maurice Massey, sophomore WR Gage Larvadain and redshirt junior WR Anthony Spurlock are likely to receive ball for the Lions. Massey leads the team in receiving touchdowns with four. Larvadain carries the majority of yards gained in the air at 582. Spurlock, with a 25.9 YPC, has the most yards per catch on average in both the team and the conference.

Leading the Vandals is redshirt sophomore WR Hayden Hatten in both yards and touchdowns. His 1,000 receiving yards and 15 receiving touchdowns were the second and first best in Big Sky, respectively. His 15 touchdowns also put him at the top of Idaho’s single-season record books, beating Jerry Hendren’s 1968 record.

Junior WR Jermaine Jackson teamed up with Hatten to give the Vandals such a great air attack. Jackson’s 938 receiving yards and 19.1 YPC are both the third best in Big Sky.

As the old saying goes, “Defense wins championships,” and that will certainly be the case when these teams go head-to-head on November 26th at 4pm PST.