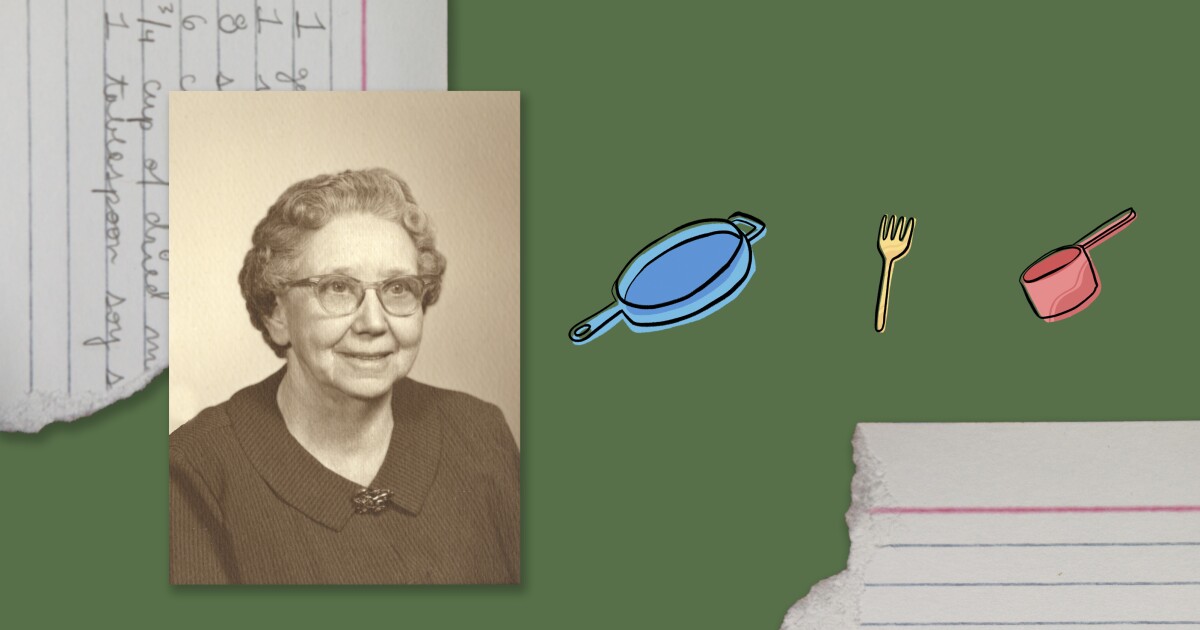 All Things We’re Cooking is a series of family recipes created by you, our readers and listeners, and the special stories behind them. We’ll continue to share more of your kitchen gems throughout the holidays.

Stu Haley’s grandma Monnette had a rule when it came to Thanksgiving dressing: you never eat anything that comes out of turkey.

Rebecca Monnette was just trying to make sure her family didn’t get sick, says Haley, so as an alternative, she made perfect, spherical balls of dressing that came together with a few simple ingredients. White bread, onions, carrots, celery, broth, eggs and sage with a pinch of salt and pepper will do.

“That way she could guarantee everyone got something because every piece, you know, every scoop was portioned,” Haley said. “It just reminds me of her because not many people have done it. She’s been gone since 1972, so whenever I do it – and I talk to my cousin about it, even he said it – it’s kind of like it brings her to the table now with us.”

Haley grew up in Shaker Heights, Ohio, but his grandma lived in the smaller town of Marion, Ohio. Every time his family made the two-hour drive down, it meant he entered a place where he felt safe, he said — a refuge from what he described as chaotic family life.

“It was a safe haven,” Haley said. “When I was with her, I knew everything would be fine. I knew there would be no argument. There would be no shouting or shouting. Everything was very calm with her and everyone was on their best behavior.”

Those Thanksgiving celebrations meant the world to Haley, and after his grandma died, the holiday gatherings slowly began to reverse without her being there to keep the family together, he said.

But about 20 years ago, Haley (who now lives in Baltimore) started making the dress-up balls himself. Today they are once again a staple of Thanksgiving and other celebrations, including special gatherings with his husband’s family in July.

“If I take these out to dinner, if I can get two left over for us, we’re going to be really fine,” he said.

As for how best to eat the delicious, savory treats, Haley said people often cover them with heaps of gravy, though he adds his own twist.

“My favorite is with a bite of dressing ball, some gravy, and then just a little bit of that jellied cranberry sauce,” he said.

The night before, make the dressing balls, dice the bread, and place in a large mixing bowl with a single paper towel covering the dice.

In the morning, toss them and cover with the paper towel until ready to prepare. You want them soft and stale, not hard like croutons.

Slice the carrots and sauté in the butter in the skillet over medium-high heat.

Once they have started cooking, add the celery. When these are soft, add the onion. You want to stir them in the pan over medium-high heat until tender, adding salt and pepper as they cook.

Remove from the pan and set aside. Deglaze the pan with some broth and work up the brown pieces. Turn off heat and let cool.

Beat the egg and then pour it over the bread cubes. Add the onion, celery and sage and the deglazed drippings.

Slowly add about half of the remaining broth.

Now wash your hands thoroughly. You put both hands in the bread and in the bread covered with egg broth. Everything should be shuffled, thrown, etc., but don’t squeeze. If the mixture is too dry, add some of the reserve broth. You want the entire mixture to be just wet enough for the balls to hold their shape, not wet.

Take out two baking sheets. Shape the mixture into balls that are larger than a golf ball but smaller than a baseball. Compact them gently so they keep their shape. Place them on the sheets.

Immediately bake at 350 degrees for 45-50 minutes if your oven is holding a real temperature. Brush with egg yolk for an extra crispy outside.

Best served with lots of sauce. Great for Thanksgiving.