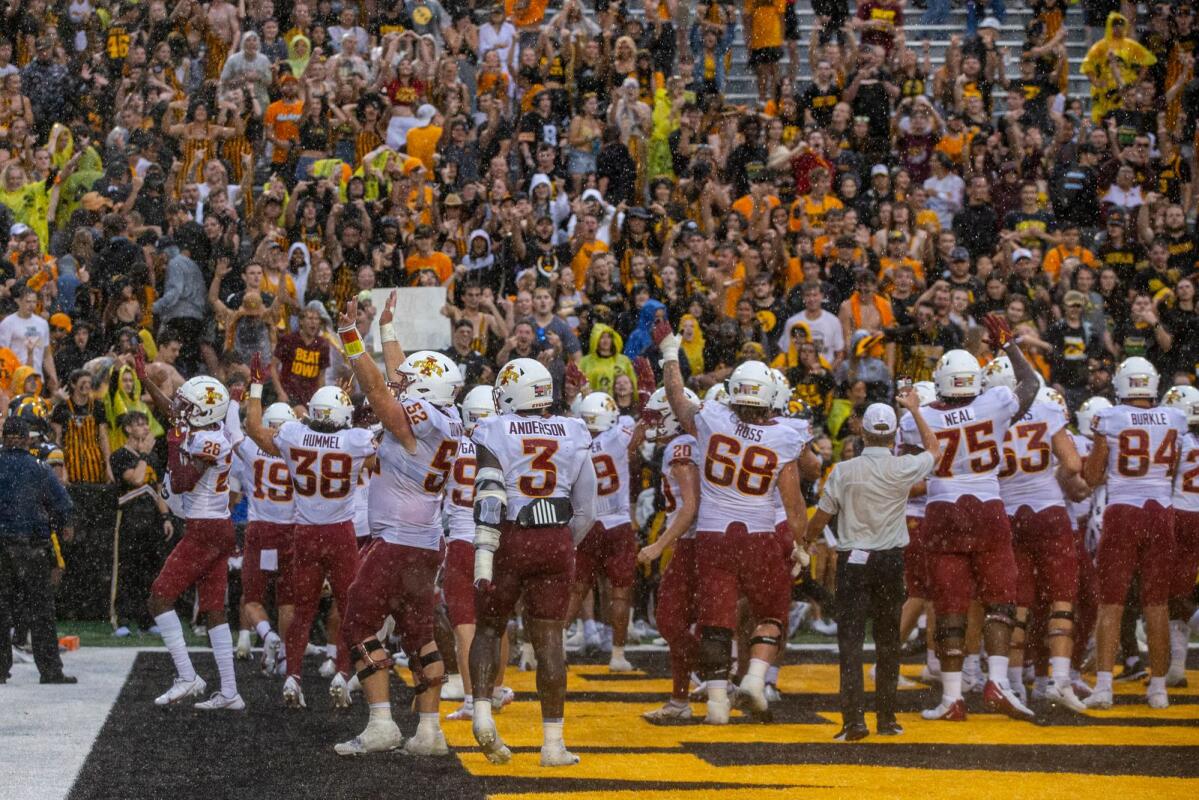 In the first season of football since the outbreak of COVID-19, Iowa fans sit behind rows of cardboard cutouts prior to the Iowa Hawkeyes vs. Northwestern Wildcats game on October 31, 2020 at Kinnick Stadium in Iowa City. A mandate from the Big Ten Conference kept the general fanbase out of stadiums this season, but fans could still represent themselves at Kinnick by buying the cutouts. (The newspaper)

IOWA CITY — The athletic departments of Iowa’s public universities have collectively spent over $7.3 million on COVID-19 testing and other pandemic precautions and responses — expenditures that are met by their main campuses, sports revenues, or federal aid.

The University of Iowa Department of Athletics spent the majority of that sum in 2020 and 2021, incurring expenditures of more than $6 million to meet the Big Ten Conference’s mandates, which require its members to all of their athletes , trainers and employees test regularly.

Iowa State University’s athletics department has so far spent more than $1 million to meet the Big 12 conference’s COVID mandates — the vast majority of them in 2020 and 2021, according to data published by The Gazette im were requested as part of an open recording request.

And the University of Northern Iowa’s athletics department incurred nearly $300,000 in pandemic expenses that UNI athletics officials said were “paid for by the university and easily attributable to athletics.”

“Some COVID expenses such as cleaning supplies and wages for additional cleaning have been paid for from central funds and are difficult to allocate by department,” UNI officials said.

All three campuses used different testing and quarantine protocols throughout the pandemic, depending on guidance from their conferences and campus leaders. All three reduced their testing to varying degrees as the pandemic continued — with the NCAA updating its guidance in January 2022 to allow vaccinated coaches and players or those recently infected to skip routine testing “unless they are symptomatic or based on a risk assessment of documented close contact with COVID-19.”

In May 2020, UI Athletics began weekly COVID-19 testing for all coaches, athletes, team staff, event staff and others who have regular contact with a team or its members – with the Big Ten stepping up daily antigen rapid surveillance in September 2020.

The ISU tested its coaches, players and other staff three times a week and within a day of each competition during the height of COVID-19 — a total of nearly 25,000 internal tests. UNI similarly applied the more frequent three-weekly protocol in 2020 and 2021, completing the mandate in spring 2022 after piling up about 7,000 tests, officials said.

“There is currently no mandatory testing,” UNI officials said.

None of the campuses received any COVID-19-related reimbursement from their conferences for the required tests and protocols.

UNI — the only public university in Iowa that provides funding for its athletics operations annually — covered its department’s total COVID-19-related expenses of $296,406, officials reported. The programs at UI and ISU are self-supporting.

ISU Athletics, which receives only a “very small tuition fee” and no other institutional or government support, covered its $1 million pandemic expenses through athletics’ medical budget — from general ticketing, conference and media revenue.

And UI Athletics covered its more than $6 million in expenses in 2020 and 2021 — with a portion of a $50 million loan it borrowed from the main campus and a portion of the campus’ federal aid.

According to spokesman Chris Brewer, UI has earmarked $2 million of its allocations from the Federal Higher Education Emergency Relief Fund for the athletics protocols. As of Aug. 31, UI had received and spent $85.8 million in federal aid — $47.2 million for institutional purposes and $38.6 million for student grants, according to the U.S. Department of Education.

Though all three sports divisions struggled with revenue losses during the worst of COVID-19 – when fans were limited or eliminated and testing protocols surged – they have since recovered.

UI and ISU reported their highest earnings in history in the fiscal year just ended, and UI expects another record year in current fiscal year 2023.

Vanessa Miller reports on higher education for The Gazette.