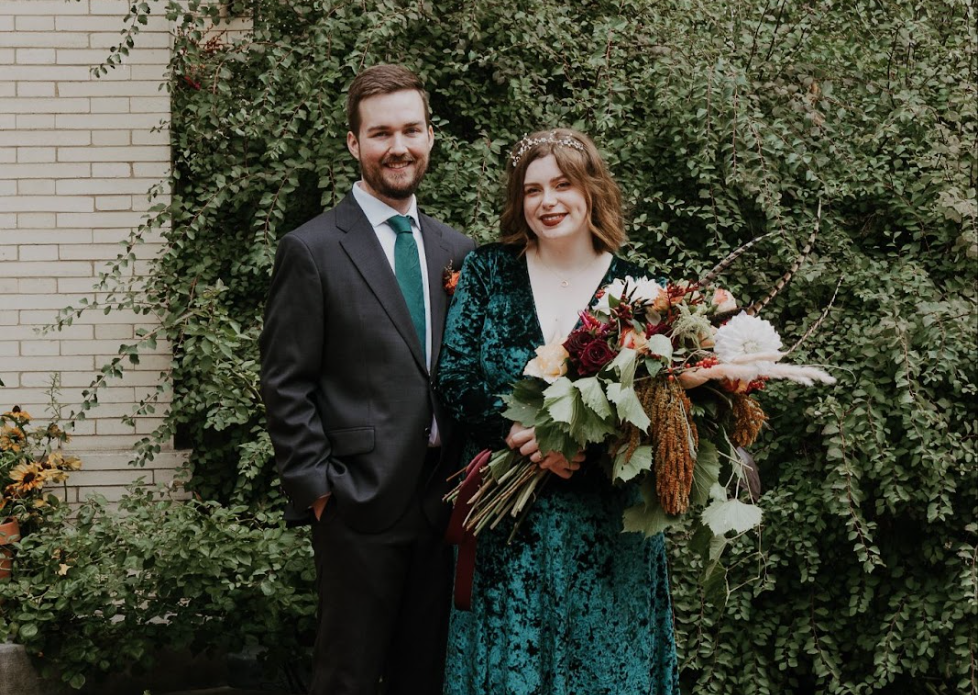 When Evan McCarthy asked Emily Boylan about her first date, her friends warned her about it.

The two had met online, in what Boylan described as “tinder’s very modern love story.” After just two days of communicating via the app, McCarthy suggested a nightly visit to the Iowa Old Capitol Building, where he was working at the time and had access when it was closed to the public. He wanted to show her around and go ghost hunting.

“My flatmates told me not to go on an after-hours dark tour with a total stranger,” she recalls. She rejected his initial idea and met him at a coffee house, and then they went to a couple of bars in Iowa City, where they both lived. The two later agreed that they are not actually bar people.

On the night the couple was interviewed for this story, it was the fifth anniversary of that first date.

But it was the second date the next night, after hours at the Old Capitol Building, as Boylan quickly felt comfortable and safe in McCarthy’s presence. A guided tour and ghost hunt filled the evening with intrigue and adventure. At this point it was November 2017 and Boylan was a senior at the University of Iowa and McCarthy was a sophomore of law school there.

Boylan is a 2014 graduate of Evanston Township High School. She is the daughter of Laura Henry of Evanston and Thomas Boylan of Chicago. McCarthy is the son of Patty and Paul McCarthy of Iowa City, Iowa.

When asked what brought them together on the dating app, they both laughed. “She was cute,” McCarthy said. “They haven’t revealed much information about themselves,” he added.

Boylan’s online search was fueled by frustration. “I reloaded it [Tinder] App because I was desperate and fed up with the college boys. I just wanted to meet people,” she said. “He was really cute and his cat was in his profile picture. And he was a vegetarian.”

Boylan and McCarthy quickly fell into a relationship. “We went on seven dates in the first 10 days we knew each other,” Boylan said. She soon felt the need to define her status. “I think I texted him, ‘Are we dating?’ I was home for Thanksgiving and I was thinking about it and wanted to ask.” Evan confirmed her question: “I said ‘yes’.”

After graduating in spring 2018, Boylan moved to Milwaukee to begin his law studies at Marquette University. The couple dated long distance for 10 months while McCarthy finished his law school. Two days after graduating, he moved to Milwaukee and Boylan’s 400-square-foot apartment. To support them both while McCarthy was studying for the Wisconsin bar exam, Boylan worked three jobs.

“I had an internship at Disability Rights Wisconsin, I worked a terrible job at a vegan restaurant, and I walked dogs on the side,” she said. Though holding three jobs while still in school wasn’t easy, she knew McCarthy couldn’t work at the time. “Studying for the bar is a full-time job,” she said.

McCarthy passed the bar exam and began immigration work in Milwaukee while Boylan finished his law school. Both Boylan and McCarthy now work for Legal Action of Wisconsin. Boylan works in eviction defense and McCarthy works in the student legal aid program. They continue to live in Milwaukee with their three cats: Bella, Prudence, and Vesta.

Both Boylan and McCarthy knew early on that they were a committed couple. “We knew all along that we wanted to get married,” Boylan said.

“None of us thought of a future that didn’t include the other. It was natural for me to go to Milwaukee,” McCarthy added. “We made plans very early on in the relationship for how we would interact.”

In the fifth month of dating, Boylan McCarthy proposed. She said, “Hey, if you’re not employed in 10 years, do you want to get married?” To which McCarthy replied, “Ten years? Do you want to wait that long?”

As for their future off-the-beaten-path adventures, the pair are being intentional in their planning. “We still go on a date once a week and try to do something different,” McCarthy said. “We go to the local college planetarium regularly. They have presentations on different constellations and the different cultural stories behind them.” The couple were also “touring the Botanical Gardens. We have a lot of fun and different dates.”

While the couple stayed close to Milwaukee during the pandemic, it was a long-awaited trip to Iowa City when the two officially got engaged. It was April 2021 and “we had just gotten our second dose [of the COVID-19 vaccine]. We waited the full two weeks and visited his parents. We hadn’t seen her in a year,” Boylan explained. While there, “Evan showed me around to all of our old dating stations. I knew the proposal would come.”

On the front steps of the Iowa Old Capitol Building, McCarthy proposed where the couple’s second date would take place. Except for one person, no one was present at the engagement. “There was a moment where a guy was, maybe a freshman? He just sat there. I almost had to ask him to move, but he eventually left on his own,” McCarthy recalled. To ensure McCarthy bought a ring to his fiancee’s liking, Boylan got involved in the process. “I sent him the picture of the exact ring I wanted. There were no surprises,” she said.

Mimosas before the ceremony

Boylan and McCarthy were married on October 2 at the Colvin House in Chicago. Bennett Thompson, a mutual friend of the couple, officiated in front of 75 guests. As for the 18-month engagement, the bride and groom agreed. “We wanted to have a fall wedding. And it felt natural to wait that long,” Boylan said.

The wedding included both tradition and special details that the couple had planned. “What has always stuck in my mind is that this is the day that people who love you from all stages of your life come together,” Boylan said. Friends even came from South Korea and Poland to be with the couple.

“In the beginning it was emotionally overwhelming for me. It was a very special feeling that people wanted to celebrate us,” Boylan recalled.

“Originally I was pushing for a courthouse wedding,” she said. “I wanted it to be very unconventional.” In the end, the Colvin House was the perfect setting for their celebration. “The planning process and the venue were fantastic. Grocery, flowers, everything,” McCarthy said. He added, “Having and celebrating our relationship in front of the people we love and who love us” was especially meaningful.

“We found the right balance between traditional and non-traditional while keeping it low key and true to our personality. [We wanted] a celebration of ourselves that felt true to us and allowed everyone else to celebrate in a more traditional way,” McCarthy explained.

For the late morning wedding, the couple welcomed their guests to a pre-ceremony party. The bride wore an emerald green shredded velvet gown that she made herself after learning to sew during the pandemic.

“We wanted to avoid the fanfare of not seeing each other before the wedding,” Boylan said. “We had mimosas and breakfast pastries before the ceremony,” she said.

For the wedding, Boylan then donned her traditional white wedding dress, one she chose with her mother. “One of my favorite moments was after I changed,” she said. “We walked down the aisle together, mostly because we felt like we were married a long time ago in our hearts.”

McCarthy added his feelings about the wedding day. “I didn’t expect it to be blurry, but in my memory it’s blurry in a good way,” he said.

“It was really perfect all around. The feeling of being with all our friends from all over the world and having a presence with us was so special. That’s something I appreciate very much. It felt really great to spend time with all these people,” he gushed. The “weather was fantastic, it was a beautiful autumn day.”

McCarthy summed up the couple’s wedding by adding, “I don’t think there was one thing I would do differently that day and I can’t say that about any other day in my life.”