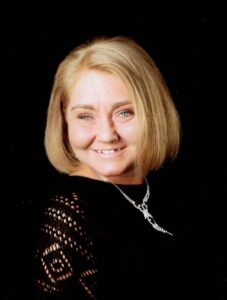 Pam married Paul Fangman on October 22, 2005. They met outside the homes of Hawkeye Community College, with their first date — according to Pam — being a Nascar race in Chicago (Paul says it was earlier). They moved to Boone together in 2005, shortly after getting married at Waterloo’s Broom Factory. It was important to Pam that they renewed their vows seven years later in the presence of family and friends.

Pam welcomed the front desk staff at Fangs Automotive and has also worked at Dollar General for the last several years, both in Ogden. She had a big smile, a boisterous personality and the ability to strike up a conversation with anyone.

Pam loved the color pink, the ability to dress up, fancy drinks and seafood dinners at Red Lobster. She had a huge collection of shoes, loved a wide range of music, aspired to be a gardener and loved her many pets over the years. Pam enjoyed traveling. She attended several racing events with Paul, although she probably enjoyed shopping at nearby malls more than the racing.

From a young age and throughout her life, Pam has been a fighter, sometimes with those around her, but regularly with ongoing health issues, including a diagnosis of Type I diabetes at 3 ½, an eating disorder, breast cancer and congestive heart failure.

While her health limited her ability to work outside the home on a regular basis, Pam created and shared a plethora of craft and sewing projects with her family and friends, including a handful of beautiful quilts.

Pam had a tough exterior, was reliably stubborn, could hold grudges, and was very opinionated. At the same time, she had a lot of love to share with family and friends. She was often generous beyond her means and gave several gifts if one wanted to, especially to family and close friends.

One of Pam’s wishes was to have a day without having to worry about her diabetes. Her family finds solace in knowing that they can now lay down that burden. Pam struggled but cared so much for those she loved. We will miss your kindness and love.

Flowers are welcome, but those wishing to send a memorial donation should contact the diabetes organization of your choice directly.

Online condolences can be left at www.schroedermemorialchapel.com.

The Schroeder-Reimers Memorial Chapel at Sixth Street and Marshall Street is responsible for the arrangements.