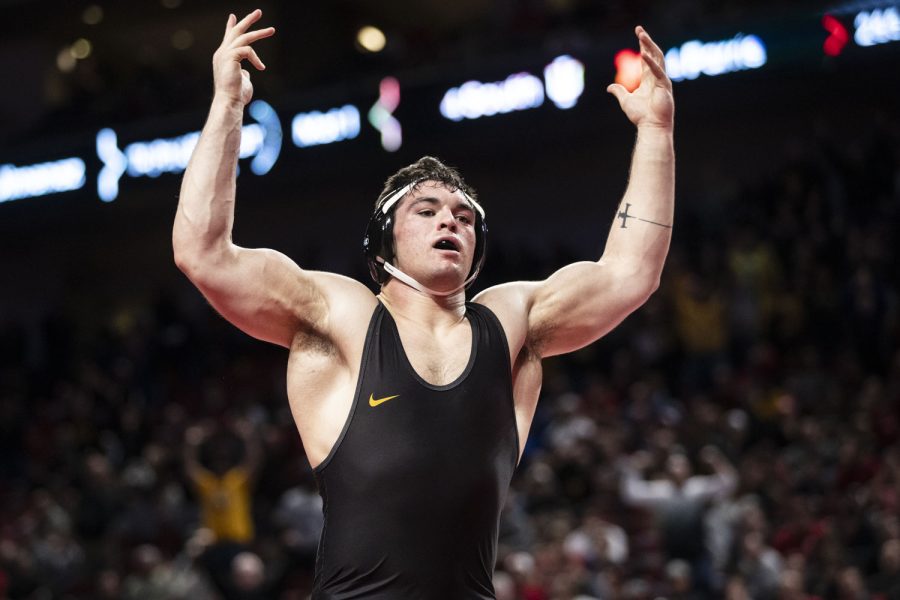 The No. 2 men’s wrestling team from Iowa went undefeated in its triple road trip to New York on Thursday and Friday.

On Friday, Iowa defeated Sacred Heart and Buffalo at the Arm Bar at the Armory Tournament in Albany, New York.

The Black Knights, who received votes in the most recent National Wrestling Coaches Association poll, presented a challenge to the Hawkeyes. But Iowa scored bonus points in five games to come back from a 9-3 deficit and win 28-13.

Army won the first match of the dual at 125 pounds when No. 24 Ethan Berginc pinned Iowa junior Aidan Harris – a transfer from Iowa Central – in the first period to give the Black Knights a 6-0 lead.

Hawkeye junior Cullan Schriever, who took home a title at the Luther Open in the elite 133-pound weight class on Nov. 12, claimed his first tied win of the season over Army’s Rich Treanor, 2-0. Schriever accumulated points through drive time and an escape in the third period. 133-pounder junior Brody Teske didn’t make it to New York.

Iowa suffered another 141-pound loss as Hawkeye senior Drew Bennett fell to Black Knight Julian Sanchez in a 5-3 decision. Bennett secured a turnaround early in the third period to make it 4-3 in favor of Sanchez but couldn’t finish it. Army extended their lead to 9-3.

Hawkeye junior Cobe Siebrecht, who took the nod against redshirt newcomer Caleb Rathjen at 157 pounds against Army, won 8-0 against No. 28 Nate Lukez. Siebrecht recorded three takedowns and 4:01 drive time to earn the big decider victory and give Iowa its first 11-9 lead in doubles.

“We want to see our guys go out there and fight like Cobe,” head coach Tom Brands said in a statement. “If you have the opportunity, go out. That’s what we’re looking for.”

Iowa dominated the night’s only ranked matchup at 165 pounds. Hawkeye sophomore No. 13 Patrick Kennedy secured a 22-9 major decision over No. 28 Dalton Harkins. It was Kennedy’s first victory over a nationally-ranked opponent.

“I stayed tough on the guy,” Kennedy said in a statement. “I felt good when I scored points, but it could have been better. If I had walked out of here with a tech fall I might have smiled a little more but we have a good thing going right now.”

The Hawkeyes officially secured the double with a big decider by 197-pound No. 2 elder Jacob Warner. He defeated sophomore Kyle Swartz, 20-7.

Iowa Heavyweight Senior #4 Tony Cassioppi became the fifth Hawkeye to earn bonus points when he pinned Kade Carlson in 1:26 for his second fall of the season.

Iowa experimented in several weight divisions in his 33-6 win at the arm bar of the Armory tournament over Sacred Heart.

The Hawkeyes went down 3-0 as Harris suffered his third loss of the season to Pioneer Mikey Manta at 125. Iowa got his first points on the board at 133 pounds when Schriever defeated Sacred Heart’s Andrew Fallon 20-13.

Bennett showed resilience in the 141-pound match, nearly falling late in the second half to come back from an 8-4 deficit and win 12-8.

Rathjen made his 157-pound debut of the season against Sacred Heart’s Nick Palumbo, falling 8-4.

Senior Hawkeye Joe Kelly, who posted a 4-4 record at 157 pounds last season, made his season debut against Sacred Heart at 174 pounds. He earned the big decision over Ryan Bolletino, 17-7.

Iowa junior Zach Glazier – who went 3-2 at 197 pounds and won a title at the Luther Open last season – made his season debut, recording a tech crash in the second period against Sacred Heart’s Nick Copley.

Cassioppi ended the duel with his third straight pin of the season in 1:28 over Marc Berisha.

Iowa completed its three-dual road trip against Buffalo at the arm bar at the Armory tournament, defeating the Bulls 35-7.

The Hawkeyes continued to fight at 125 pounds without three-time national champion Spencer Lee.

Iowa student Charles Matthews, who had a 4-6 record at 133 pounds last season, made his season debut at 125 pounds against Buffalo’s Pat Adams, falling 11-2.

But the Hawkeyes responded by notching up five straight wins and winning eight of their last nine games.

Schriever ended the road trip unbeaten with a 24-9 tech fall over Buffalo’s Mason Bush to give Iowa a 5-4 lead. Then Rathjen recouped his loss to Sacred Heart at 157 pounds and scored his first career win over Buffalo’s Nick Stampoulus, 6-0.

Siebrecht went up to 165 pounds against Buffalo to face Noah Grover, winning 8-0. No. 8 Abe Assad won the only ranked matchup of the duel with a 22-7 tech fall over No. 32 Giuseppe Hoose. Cassioppi ended the duel with his fourth straight pin, defeating Greg Hodulick in 53 seconds.