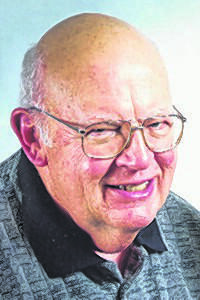 Lloyd L. Mueller, 81, of Dubuque, formerly Center Point, died on Wednesday, November 16, 2022 at his home surrounded by his wife and children.

Lloyd’s funeral will be

Lloyd was born on April 3, 1941 in Sumner, Iowa to Paul Alfred and Sophie Pauline Volker Mueller. Lloyd was a veteran who proudly served our country in the US Air Force, US Navy and US Army. He enlisted in the US Air Force in May 1960, days after graduating from Sumner High School. As an aviator he was based in Orlando, Florida; Hahn Air Force Base, Germany and Andersen Air Force Base, Guam during the Vietnam War from 1960 to 1968. After his honorable discharge from the US Air Force, he served in the US Navy for two years before enlisting in the Army Reserve until 1992. He loved He remembers his time in the military, his vacation travel adventures, the lifelong friends he made, and most importantly, the opportunity to serve his country. His education in communications enabled him to start a career with Northwestern Bell Telephone Co. in 1969.

On August 30, 1969 he married Eleanor E. Oltmann in Monticello, Iowa. They worked and raised their families in Cedar Rapids and then in rural Center Point, Iowa. His 33-year career with the phone company as an in-house technician was long. He was a longtime member of the St. John’s Lutheran Church Missouri Synod at Center Point. When not working or mowing the lawn, he enjoyed fishing, hunting, traveling, and visiting family and friends. His children will remember him because he always worked hard, and although his retirement was interrupted by Parkinson’s he braved it and kept hoping that a cure would be found. Lloyd loved telling stories over a cold drink. His smile, laughter and sense of humor will be greatly missed by all who knew him

His parents preceded him in death; a sister, Marlys, and his sister-in-law, Dorothy.

A memorial was erected for the Dubuque Hospice.

The family would like to thank their friends at No Place Like Home, Hospice of Dubuque and Eagle Point Place for their care and support.

A photo tribute can be viewed and condolences offered to the family by visiting Lloyd’s obituary at www.hskfhcares.com.