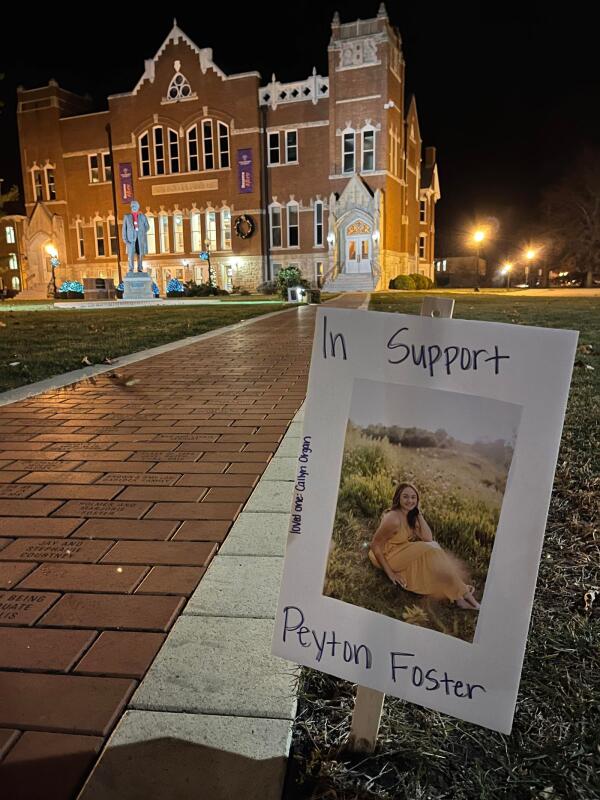 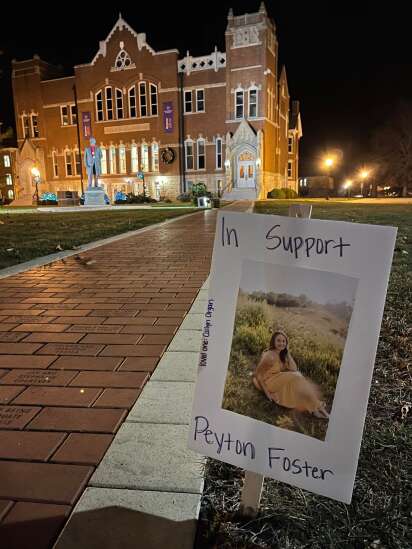 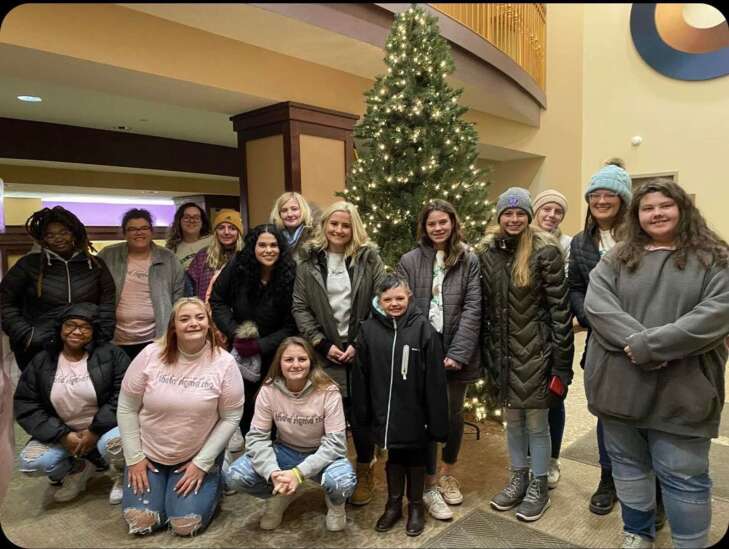 The “Light the Night” walk was particularly poignant for Sorority President Callyn Organ when she saw the photo of her childhood friend. Peyton Foster was diagnosed with lymphoma last week. (photo submitted)

MT. PLEASANT — A warm glow shone from the Iowa Wesleyan campus Thursday night in honor and memory of those affected by leukemia and lymphoma at a Light the Night event.

When attendees arrived at the IW Chapel, the hosts asked them to choose a correspondingly colored glowstick.

“Each color meant something,” said Callyn Organ, President of Theta Sigma Rho. “Blue for Survivors, Pink and Green for Remembrance, and Yellow and Orange for Support.”

Lane Levine, an IW professor who completed his last chemo treatment five weeks ago after being diagnosed with lymphoma, recounted his journey.

Kelsey Brown spoke on behalf of her childhood best friend’s battle with cancer and Anne Kindhart spoke about her own experiences as a survivor of childhood cancer.

University Provost DeWayne Frazier said there was not a dry eye in the chapel as he followed Brown to share insights from his sister’s perspective as a pediatric oncology nurse.

According to Frazier, “It was an opportunity to really talk about the journey these kids are on, and they need people to make them laugh and feel and be comfortable.”

Guests were then invited to pop their glow sticks, two colors at a time.

“We started with support and then reminder and had them hold up their glowsticks for everyone to see,” Organ said. “Then the survivors went to the center and everyone stood around them.”

After this symbol of support, the congregation embarked on a mindful walk across campus.

“When we left, it was pretty strong,” Frazier said.

The path was lined with photos of support and remembrance for those affected by cancer.

A photo occupied a special place in the heart of the organizer Organ.

“My friend Peyton was diagnosed with lymphoma last week and I’ve known her most of her life so having her picture at the event was very special,” she said. “She is strong.”

“We ended up praying for peace, comfort and God’s strength for all of these people,” Frazier said. “The young ladies who ran the event did a really good job and I’m very proud.”