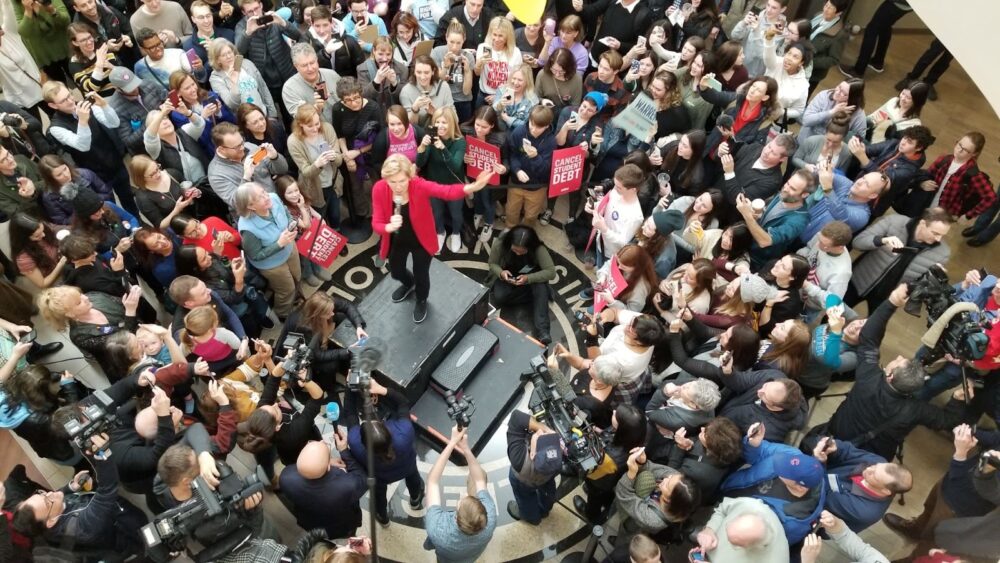 I looked over the shoulder of the Marion County, Iowa Democratic Party chair, who was also a caucus officer, as she read the results from a caucus site in Knoxville, Iowa, on that fateful night, February 3, 2020 , entered .

She jabbed her finger at her iPhone’s keypad, once, then again, harder. She paused, then turned to another officer seated to her left, said something, showed her the screen of her iPhone, and then looked back at me.

“What’s not working?” I asked over the din of the 40 or so people crowded into the Knoxville Public Library.

In the eyes of the media, this caucus night was an absolute catastrophe. It didn’t matter that procedures existed for evaluating results for a variety of circumstances, even if they had to be delivered personally to party headquarters the next day; the insatiable appetite of the media demanded immediate answers. And in the end we did our job. We have sifted the field.

Iowa Democrats are now waiting with bated breath to hear what the Democratic National Committee says about whether or not we can continue to hold our nation’s first gatherings. Republicans remain committed to holding their caucuses in Iowa and showed their support for the Democratic caucuses the morning after that fateful night. They stand strong, and so should the Democrats.

Partly because of this “failure” of the caucus, the Democratic National Committee is reconsidering our status, but has decided to wait until after the midterms to decide what the future holds for the early caucus and primary states. It is now after the midterms, and the DNC’s Rules and Bylaws Committee will meet December 1-3 to consider the fate of the caucuses, with the final decision expected to be made by the entire DNC in early 2023.

The Iowa Democrats should tell the Democratic National Committee to shut it down. Tell them we’re holding our caucuses in Iowa, both Democrat and Republican, if we want. So should the other early states.

The 2020 Iowa caucuses fell through because the DNC and then-Chairman Tom Perez orchestrated them. Perez wanted the caucuses to fail and made it happen. They foisted on us a problematic app without adequate testing. The Nevada caucuses had enough advance warning and abandoned the same app. We should too, but hindsight is 20-20.

In a post-caucus analysis, an independent audit commissioned by the Iowa Democratic Party found that the national Democratic Party “interfered aggressively in the 2020 caucuses, slowing down and complicating the process on caucus night.” Sure, there’s plenty of finger pointing, but the report concluded, “Without the intervention of the DNC in this process, the IDP might have reported results in real time, as was intended…”

DNC staff declined to be interviewed for the audit.

Iowa Democrats are fed up with the DNC’s interference in the Iowa election process. They’re tired of their so-called “beauty pageants,” where they invite potential candidates to Washington to see who they’ll fund in the primary. It didn’t go so well.

Senate Majority Leader Chuck Schumer is a disaster for my state. Schumer said the Democrats would not win the Senate race in Iowa. They didn’t, but around the same time Schumer made his remarks, the highly respected Des Moines Register Iowa Poll had former Navy Vice Admiral Mike Franken within 3 percentage points of Republican Senator Chuck Grassley. Franken ended up losing 12 points, in part because Schumer handed the Iowa Republicans talking points that kept them milking until Election Day.

We must ignore the DNC and hold the Iowa caucuses as required by state law:

“The delegates to the district assemblies of the political parties and the members of the party committee shall be elected at district assemblies held no later than the fourth Monday in February of each even-numbered year. The date must be at least eight days prior to the scheduled date for a meeting, caucus, or primary that constitutes the first critical phase of the nomination process for president of any other state, territory, or group that has the authority to select delegates at the presidential candidacy. The state central committees of the political parties set the date for their parliamentary groups.”

So are we supposed to break state laws to appease the DNC that broke the caucuses? Abandoning our historic role in the presidential candidate process?

no What will the DNC do to us if we continue? Not picking the candidates before Iowa can consider the field? Holding back money they won’t give? How about sanctions for presidential candidates attending historic Iowa rallies? Not placing our delegates at the convention? Like they tried Florida and Michigan in 2008 when they pushed their main calendars up? They compromised and gave these state delegations half the votes because they “broke the rules”. Iowa didn’t break any rules. Instead, the DNC is changing the rules to break Iowa. And this is where I thought the Democrats wanted everyone’s vote to count.

The Iowa Democratic Party needs to recognize their power and say now that we will be holding the 2024 caucuses in Iowa. If the DNC threatens any kind of sanctions, call their bluff. You have no real power.

“Here’s a great way for Democrats to permanently alienate themselves from rural America, where they’re already being beaten up: Throw the Iowa caucuses in the ditch.”

Not long ago, Barack Obama emerged victorious from the Iowa caucus. Without the caucuses in Iowa, Obama would probably never have become president. People will say but Iowa is a red state now. Maybe. But that’s an even better reason to continue the historical tradition. Let our presidential candidates hone their messages here, and they’ll be better prepared in other red and purple states. And maybe make Iowa blue.