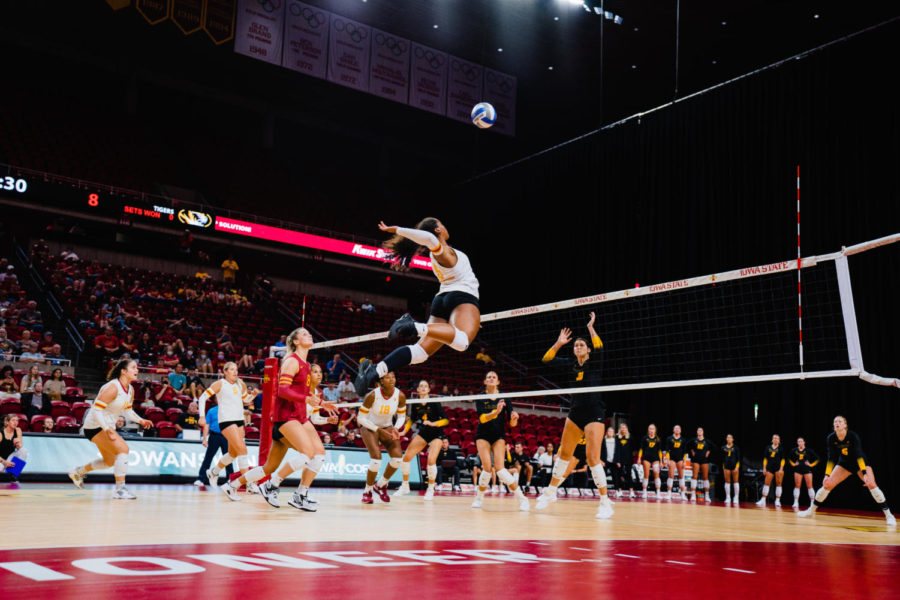 Maya Duckworth jumps for a kill during an exhibition game against Missouri on Aug. 19.

The Cyclones won the first two sets of the Road Big 12 Conference Matchup. But the Jayhawks got the momentum on their side and won the last three sets by a convincing margin.

Iowa State finished a tight first set with a 3-0 run to give Kansas an early advantage. Kills from senior Eleanor Holthaus and Maya Duckworth gave the Cyclones set point. Then a tandem block by Duckworth and Brooke Stonestreet brought victory to Iowa State.

In the next set, Iowa State survived and took a 2-0 lead. But signs were beginning to show that the dynamic of the game had changed.

In the second, Kansas went on a 6-0 run to level the set at 21. Two attacking errors from Iowa State and two kills from Ayah Elnady provided Kansas with a morale boost.

The Cyclones survived the second and won 25-22, but in the next three sets Kansas built on the momentum gained late in the second set.

In the third, Kansas grabbed three straight kills from Elnady and pulled off the day’s biggest set win. The Jayhawks finished the third ahead of the Cyclones 25-14.

Elnady became the game’s top scorer, finishing the game with 19 kills on 58 swings with the ball.

Kansas’ momentum continued in the fourth. The Jayhawks earned the set win 25-18. And in the fifth, Kansas started the set with a 9-1 goal run. They finished the Cyclones with a 15-8 win.

For Iowa State, freshman Maya Duckworth continued her run and stellar debut season as Cyclone. Duckworth was the top scorer in the state of Iowa with 14 kills from 41 attempts. She added 11 dig to her box score to complete another double-double.

Saturday’s performance marked the fifth straight game in which Duckworth scored in double digits. In the last five matches, the reigning Big 12 newcomer of the week has recorded three double-doubles.

Duckworth had 10 digs against Texas and Kansas State while he had 10 and 11 kills for Iowa State in those games.

In her first season in Ames, Duckworth ranks second with the Cyclones for total kills. She sits just behind senior Holthaus, who ranks fifth all-time in kills for Iowa State.

The 18-11 Cyclones have a final at the Hilton Coliseum on Wednesday.

The state of Iowa will honor its senior class, including Holthaus, for its latest performance at Ames and look to add another Big 12 conference win to its resume before the postseason begins.

The NCAA volleyball tournament welcomes the 32 automatic qualifiers who must win their conference and 32 open entries.

The state of Iowa, which received votes in the most recent top-25 poll, must receive a general selection committee offer on Nov. 27 to enter the NCAA tournament.