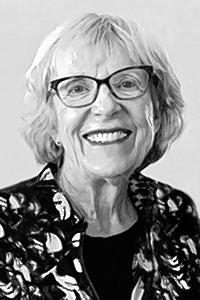 Joanne Marie Henderson, 77, went home to Jesus on Sunday, November 13, 2022, after a recently diagnosed ovarian cancer diagnosis. On Saturday, November 26, a rosary will be held at 8:30 a.m. at St. Boniface Catholic Church in Waukee, followed by a memorial service at 9:00 a.m. A memorial service will follow at Booneville Cemetery in Booneville, Iowa. Immediately after the funeral procession, the family receives friends for a luncheon at the church.

Joanne was born on September 19, 1945 in Ottumwa, Iowa to George and Betty (Nelson) Gail. Raised in Ottumwa, she graduated from Walsh Catholic High School and received a scholarship to attend nursing school, happily choosing a calling to marriage and motherhood instead. She married the love of her life, Dennis Henderson, on February 8, 1964 at St. Patrick Catholic Church in Ottumwa. Together they raised four children in Cedar Rapids, Iowa, whom they supported in their Catholic faith as members of the St. Pius X Catholic Church. Joanne and Dennis moved to Urbandale in 2004 and joined St. Boniface Catholic Church in Waukee.

Joanne has made everything beautiful with her love of flowers, her genuine interest in the people around her and the way she lives her faith every day.

Joanne enjoyed gardening, reading, playing the piano and listening to music. She has served at St. Boniface Church, where she has served as sick and homeborn minister, First Communion catechist for second graders, and support for veterans and their families. Joanne’s greatest passions were her husband, children, grandchildren, great-granddaughter, her devotion to Mary and the weekly fellowship of her prayer group at St. Boniface.

Joanne was preceded by her death by her parents and sister-in-law, Joyce Gail.

In lieu of flowers, memorial donations can be made to St. Boniface Church for the El Salvador Mission. Online condolences are welcomed on Ilescares.com.

Joanne’s legacy is that she showed all she touched that they love by loving gently and that she served by serving.