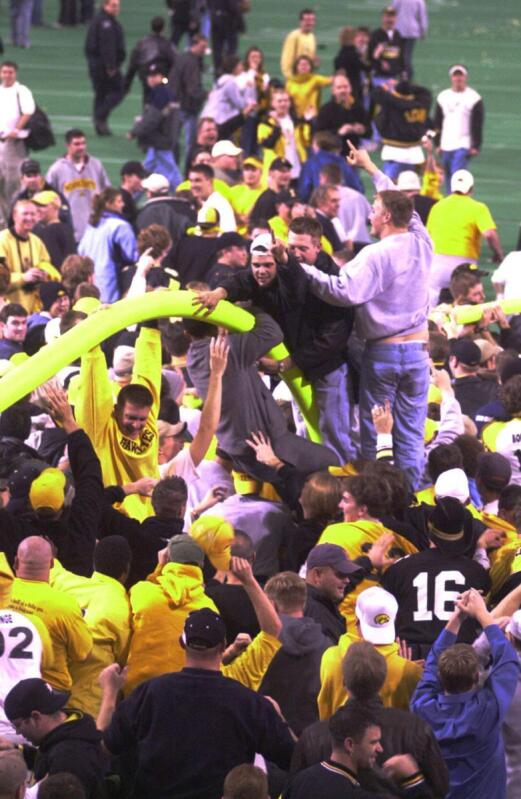 Iowa fans hang from a goal post after the Hawkeyes’ 45-21 soccer victory over Minnesota November 16, 2002 at the Metrodome in Minneapolis. (The newspaper)

20 years ago this week, Iowa fans toppled the goalposts of the Hubert H. Humphrey Metrodome in the South End Zone and carried a post up the stadium steps after the Hawkeyes’ 45-21 win over Minnesota.

It was anarchy in the most militaristic of American sports. It was funny too, especially the realization that there was no way the Upright was going through the stadium’s revolving doors.

The win gave the Hawkeyes their first undefeated Big Ten season since 1922.

“We had about 50,000 fans charging the field, knocking down goalposts, throwing people up and carrying us off the field,” said Iowa defenseman Matt Roth. “It was a lot of fun. They grabbed everything they could. They were kleptomaniacs trying to steal players, coaches and goalposts.”

Those fans — well, some of the strongest of the estimated 32,000 cheering for Iowa at the 65,000-seat stadium — actually lifted Hawkeye players. One was 6-foot-7, 315-pound David Porter, who was carried on the shoulders of strangers for a while.

“I’m not used to this,” Porter said. “I’m tall, but that was a bit scary. I’m used to having my feet on the ground and being tall.”

Iowa’s program has had many good days and great days, both at home and away, in the 20 years since. But there’s never been anything like that insane afternoon.

Can Saturday be a smaller version? no For one, it will be about 7 degrees Fahrenheit by the time the Iowa-Minnesota game wraps up at the open-air Huntington Bank Stadium, and even the happiest fans will be happier when they get out there and find a heated shelter.

Second, it’s not a game for nailing down a perfect Big Ten season. This serves to keep the West Division’s title hopes alive and go 5-3 in the league. This ain’t the stuff of hauling 300-pounders and smashing goalposts.

Maybe the game can still become famous in the Hawkeye story. The coldest game in Kinnick Stadium’s history occurred in 2013 when it was 18 degrees and 18 mph winds at kick-off. This one could be even colder.

So there you have it, and then you can have the expected brutality of a defense-dominated game, with a full forward pass being a possible rumor for either offense. You might win in Iowa.

If that’s the case, the Hawkeyes will almost certainly pick up a home win over Nebraska next Friday when they return to Indianapolis to play for a league championship.

It should be noted that the opponent in Indy has a balanced and brilliant offense that accompanies good defense and he would play in the air-conditioned atmosphere of Lucas Oil Stadium. But nobody cares at the moment.

Incidentally, on that November day in 2002, Iowa sped 365 yards in the air-conditioned Metrodome, proving that 20 years ago really is a journey back in the return plane.

Going even further back: Eddie Vincent was an Iowa football player who served as mayor of Inglewood, California for 12 years and then served in the California legislature for the same time. A city park in Inglewood bears his name.

His 96-yard streak against Purdue in 1954 is still Iowa’s longest offensive play of all time.

When Vincent was a senior in 1955, the Hawkeyes defeated Minnesota 26-0 in Iowa City. Vincent, an All-Big Tens halfback, threw a left-handed pass for a touchdown and rushed to two others.

On Wednesday, Iowa defense coordinator Phil Parker used the word “violent” to describe his unit’s practice that morning, adding, “That’s a good thing. That’s how you want it.”

If football didn’t exist in this country, it would probably be invented tomorrow in its current form.

Anyway…no matter what the outcome of this game, let’s all hope it involves some nonviolent anarchy. And if you’re there, wear long sleeves.