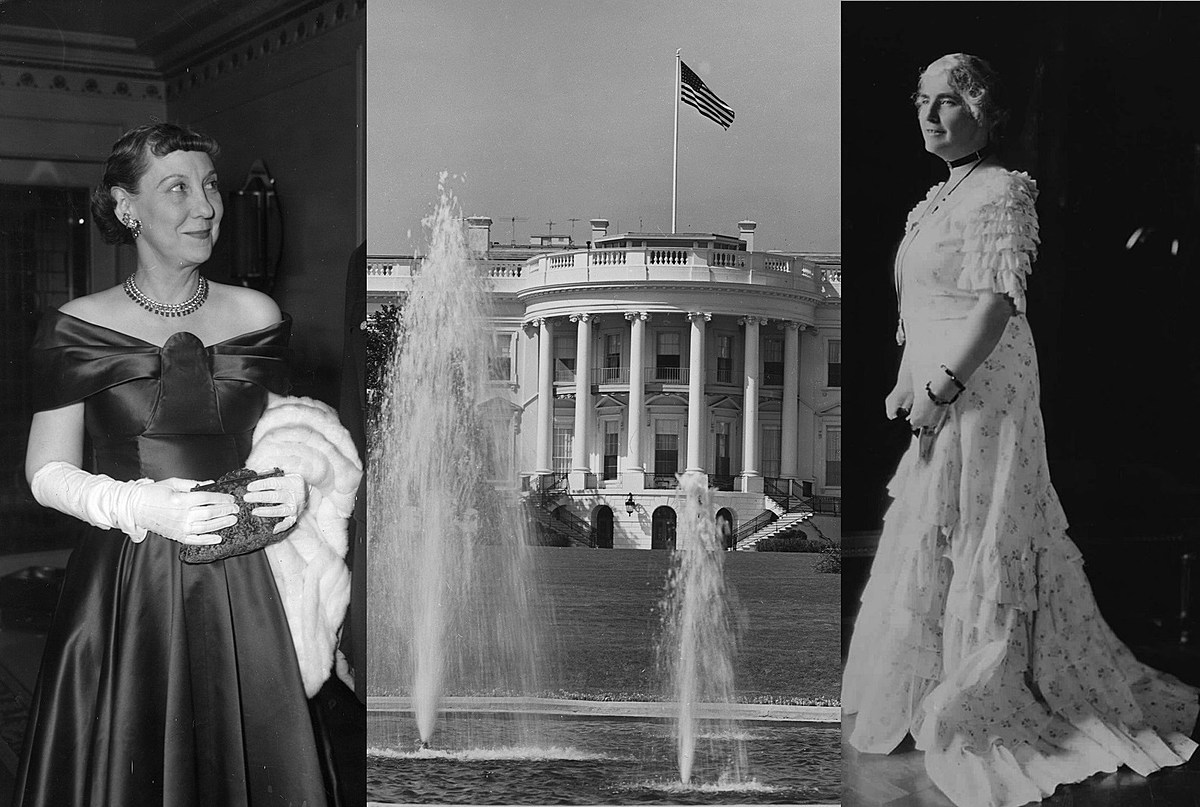 Since George Washington became President of the United States in 1789, only 53 women have served as First Lady. Only two of them are from Iowa. Amazingly, both served the nation over a 30-year span.

The first Iowa-born woman to serve as first lady was Lou Henry Hoover. In the March 1929 photo above, she is greeted by a marching band.

Hoover was born on March 29, 1874 in Waterloo, Iowa. Due to the poor health of Lou’s mother, Florence Henry, the family moved to warm California a decade later.

According to the White House History, Lou Henry met Herbert Hoover in 1894 when she was a freshman at Leland Stanford Junior University. She met her future husband, a senior, in a geology laboratory. Herbert Hoover later said he was struck by her “quirky mind, blue eyes and big grin.”

Lou Henry added Hoover to her name when she married future President Herbert Hoover, who was born in West Branch, Iowa, in 1899.

Lou Hoover first served as President of the Girl Scouts of the United States in the 1920s. In the 1925 photo below, she can be seen in her Girl Scout uniform.

Hoover would again serve as Girl Scout President in the 1930s. During this time, a plan was approved to bake and sell cookies in support of the Girl Scouts.

*Thanks to the Herbert Hoover Presidential Museum-Library in the West Branch for providing many of Lou Henry Hoover’s photos for this story.

Lou Henry Hoover was vice president of the National Amateur Athletic Federation in the 1920s. She asked the organization to set up a women’s department.

When Herbert Hoover began serving as the 31st President in 1929, Lou became the First Lady. She was the first First Lady to hit the radio. In the 1931 photo below, she is preparing a radio broadcast about the Girl Scouts.

Also in 1931, the family posed in front of the National Christmas Tree.

Lou Hoover used her own money to pay for the renovation of furniture that belonged to the 5th President, James Monroe. In the picture below from 1931 she is seated at Monroe’s desk.

In 1932 she helped the Red Cross produce free clothing for the unemployed.

And distributed Christmas presents to the poor of the Central Union Mission.

In April 1932, Mrs. Hoover posed for a photograph in a cotton dress in hopes of sparking a cotton fad in the United States, according to the Herbert Hoover Presidential Museum-Library.

Lou Henry Hoover “suffered an acute heart attack on January 7, 1944, from which she did not recover”. She was 69 years old. Hoover is buried next to her husband in West Branch.

A memorial sculpture garden in Waterloo honors Lou Hoover. It is close to downtown. This sculpture was installed in 2016:

The other future Iowa-born First Lady was Mamie Geneva Doud. She was born on November 14, 1896 in Boone.

In 1915, Doud met a second lieutenant named Dwight D. Eisenhower. According to the White House, he fell in love with Doud immediately. Eisenhower described Doud as “a lively and attractive girl, shorter than average, cheeky in countenance and in her whole demeanor”. Doud was 19 when they married on July 1, 1916. The two were together for 52 years until his death in 1969.

Their love for each other is still evident in this 1957 photo with Eisenhower, then President of the United States, in his general’s uniform:

Mamie was at her husband’s side in 1945 when General Eisenhower received the Distinguished Service Medal from President Truman.

Eisenhower again received a fifth Distinguished Service Medal from President Truman in 1952. Eisenhower would succeed Truman as President of the United States the following year.

Here is the growing family before the 1952 election.

In Chicago in August 1952 for the Republican Party Convention:

Eisenhower’s presidency ended in 1961. The two shared a big smile in London in August 1962.

A week later they were photographed again in London, this time with their grandchildren Dwight David and Barbara Anne Eisenhower:

Mamie Eisenhower died on November 1, 1979 at the age of 82. She is buried with her husband at the Eisenhower Library in Abilene, Kansas.

The birthplace of Mamie Eisenhower (photo in the middle of this story) is located at 709 Carroll Street in Boone.

READ MORE: Scroll to see what the big headlines were in the year you were born

Here’s a look at the headlines that have captured the moment, spread the word, and helped shape public opinion over the last 100 years.