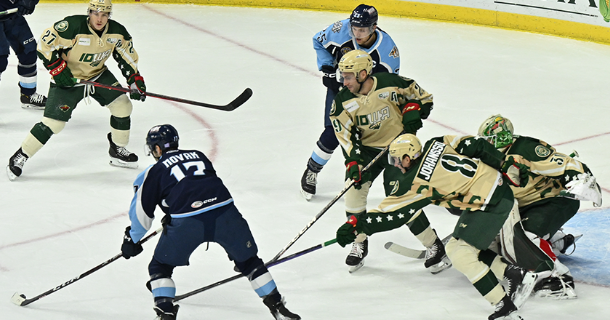 DES MOINES, Iowa — The Milwaukee Admirals scored three goals on either side of Iowa’s lone tally en route to a 6-1 win over Wild Friday Night. Jimmy Huntington had a goal and two assists for the Admirals and Yaroslav Askarov had 32 saves.

Milwaukee went 1-0 in the first half against Iowa, 8:36 when Tommy Novak whipped a wrister from the top of the right circle through a defender’s legs and under Jesper Wallstedt’s blocker (28 saves).

The Admirals extended their lead to 2-0 just before halftime in the second period. After a stretch pass from John Leonard, Tim Schaller entered the wild zone and backhanded Wallstedt at 9:49.

Huntington made it 3-0 in Milwaukee’s favor at 1:43 of the second period when he pounced on a loose puck in the low slot and placed a shot over Wallstedt’s right pad.

Iowa recovered seconds later. Steven Fogarty directed a puck past the Admirals net, but Sammy Walker brought the puck forward again and Fogarty shot it past Askarov at 14:27 of midframe.

Kiefer Sherwood responded with a long one-timer for the Admirals in the closing minutes of the second period. Milwaukee led 4-1 after two periods and had a 25-24 shot advantage.

The Admirals passed the Wild 34-33. Iowa was 0-to-6 man advantage while Milwaukee remained scoreless on two power plays.

The Wild and Admirals meet again at 6 p.m. Saturday night at the UM-Milwaukee Panther Arena.

Iowa Wild Hockey is presented by MercyOne Des Moines Medical Center. Visit www.iowawild.com for more information. Fans can purchase individual game tickets through the team’s website at www.iowawild.com. Group tickets (10 or more), suites, Wild 365 memberships, or premium tickets may be purchased by contacting the Iowa Wild Ticket Department at 515-564-8700 or [email protected] The 2022-23 season marks the 10th anniversary of hockey at the Iowa Wild. Fans can purchase season tickets for the 10th Anniversary season at https://www.iowawild.com/wild-365.