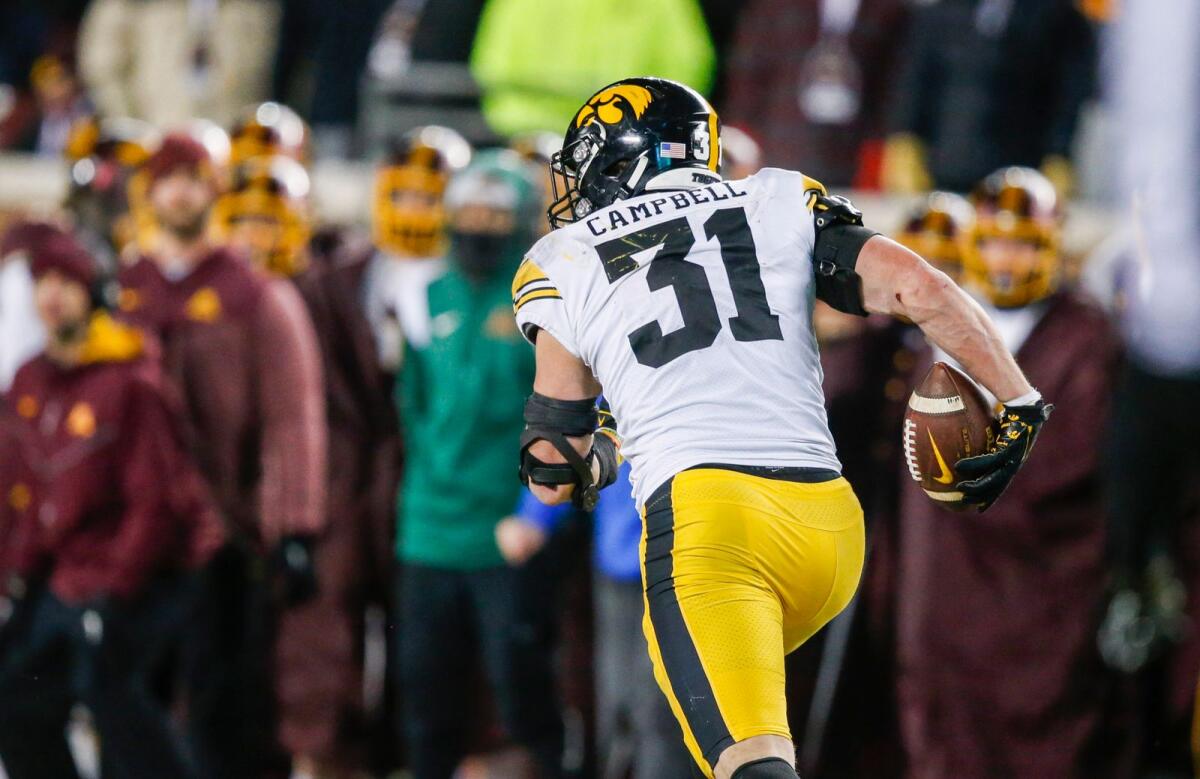 The Hawkeyes didn’t force turnovers early in the fourth quarter of Iowa’s eventual 13-10 win over Minnesota. That usually doesn’t bode well for the Iowa football team, which is 1-3, if they tie or lose revenue margin.

But then Jack Campbell was responsible for two in the fourth quarter — a forced fumble that stopped an 88-yard drive in Minnesota and an interception that set up the game-winning drive.

“You never know when this game is going to happen,” Campbell said. “But it’s always a teammate who creates that opportunity for you.”

Here’s a closer look at some key plays from the 13-10 win, including Campbell’s interception:

Campbell’s interception came at a crucial time for both teams.

Minnesota had a third-and-7 on their own 33-yard line. If Minnesota hadn’t racked up more yards, it would have been a long try for a kicker who had previously missed a 34-yard field goal and whose longest was as a gopher from 50 yards.

Minnesota quarterback Athan Kaliakmanis attempted to needle the ball to his redshirt freshman Le’Meke Brockington when he ran an in-route. Iowa cornerback Riley Moss was right there with Brockington.

Moss, the reigning Big Ten Defensive Back of the Year, won that fight and tipped the pass.

Campbell darted toward Brockington and was in the perfect spot to catch the deflected pass.

“In my mind, I was just trying to get to the ball,” Campbell said.

Campbell showed some finesse on his interception return when he dodged John Michael Schmitz, Minnesota’s top offensive lineman. No one else was close to Campbell as he ran into the end zone in what looked like a touchdown.

But an official called out Campbell at the Minnesota 45-yard line. Iowa players were among those who disagreed.

“I was right behind him,” said safety Kaevon Merriweather. “He didn’t get out.”

At the time, a Campbell pick-six would certainly have been appealing.

It would have resulted in a seven-point lead in a game where there were few points for either team. Iowa shouldn’t have relied on an offense that ranks last among Power Five teams in yards per game.

But now that he knows what happened on the last Iowa drive, the official’s whistle may actually have benefited the Hawkeyes.

Had Campbell returned the interception for a touchdown, Minnesota would have received the ball with about two minutes remaining and two timeouts.

Instead, the Gophers had just 28 seconds and no timeouts. Of course, all they had to do was score a field goal instead of going to the end zone.

The less-time-but-less-points trade-off wouldn’t necessarily be good for every matchup, but it was favorable for Iowa vs. Minnesota.

The Gophers struggled to throw the ball in the second half – Kaliakmanis was 1 of 8 after the break – and 28 seconds left them without the ability to count on their running star.

Ice your own kicker?

True freshman kicker Drew Stevens had the opportunity to win the game for the Hawkeyes in the last minute with a 21-yard field goal.

But just before Stevens’ attempt, Iowa coach Kirk Ferentz called for a timeout.

Some confusion was apparent considering Luke Lachey looked back on the sidelines and appeared unprepared when it was snapped.

Fox commentators were quick to note how Iowa was icing its own kicker. They initially speculated that maybe Iowa didn’t have enough players on the field, but there were 11 out there.

When asked about the timeout afterwards, Ferentz called it an “interesting sequence.”

“The plan was to boil it down to one second,” Ferentz said.

Had it not been for the official review, there would have been a difference of about 26 or 27 seconds between the game clock and the game clock.

The clock stopped a few seconds early for the official review – 31 seconds remained on the game clock – preventing Ferentz from running the game clock down to within a second.

“I’m still trying to figure out why it was reviewed,” Ferentz said. “Stupid me, I thought they might give us a first down, which would have been nice. I think they checked if the ball was a fumble or not.

As the field goal unit prepared to finally go for the game winner, Ferentz called the time-out.

“Everything was screwed up,” Ferentz said. “We ended up taking the time-out early just because I was afraid we were going to grab the ball and leave.”

With Ferentz officially checked and Ferentz timed out, Stevens waited seven minutes to attempt what is likely the most important field goal of his young career.

In the long run it didn’t matter. Stevens was successful again with the 21-yard field goal attempt, and Minnesota did little with 28 seconds remaining.