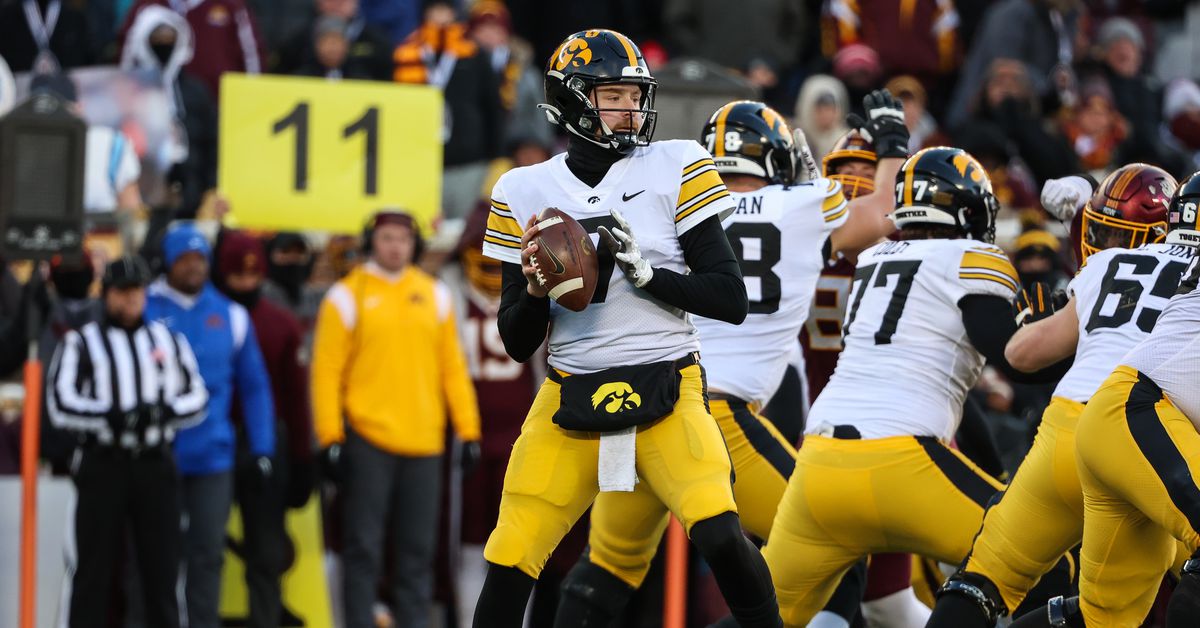 The Iowa Hawkeyes were dead in the water. Tie at 10 a.m. while Minnesota drove and bled what felt like years off the clock, all hope seemed lost.

That is, until Jack Campbell picked up Minnesota quarterback Athan Kaliakmanis and returned the interception for a touchdown, but was (stupidly) ruled dead because an umpire thought he’d stepped out of bounds. Quarterback Spencer Petras instead threw his best pass of the Dead into the red zone…but Minnesota capitalized on his timeouts, forcing Iowa into a 3rd and 1st situation that…was checked for a possible fumble.

Kaleb Johnson was down, but the antics couldn’t end as the terrible officiating side allowed Iowa to ice themselves, resulting in a squeaky, game-winning kick for the Hawkeyes to win 13-10.

The win puts Iowa 7-4 in the season and 5-3 in Big Ten play and controls their own destiny for the Big Ten West with today’s win after Illinois lost to Michigan today. One more win and we’re in. -gulp-

Oh, and by the way, PJ Fleck did quiet never struck Iowa.

It was the offensive’s best through day we’ve seen all season. Petras threw 15-24 passes for 221 yards and used a quarterback sneak to score Iowa’s only touchdown of the game. Sam LaPorta led for 95 yards on 4 receptions despite limping off the field early in the first half and never returning. Iowa’s running game struggled, with Kaleb Johnson rushing for 43 yards on 8 carries while Leshon Williams rushed for 38 yards on 11 carries.

It was a one-man show for Minnesota, with Mo Ibrahim rushing a whopping 39 times for a career-high 263 yards and a touchdown. Boy it really hurts to spoil this, doesn’t it? 😉

The Minnesota offense initially relied mostly on their running game, but was halted after a few successful first downs. In response, Petras ripped a quick pass to LaPorta, who took 57 yards from scrimmage on the first play in Iowa…but followed by Petras’ next play was a throw to the floor, but I digress, a poor snap 2nd down and a terrible TE screen on the 3rd down and long that forced Iowa to settle for a 38-yard FG.

Iowa’s second offensive drive was similar to his first, with an emphasis primarily on the run, with minimal success. But on the 4th down, Petras found LaPorta for a huge 25-yard conversion to get a new set of downs. That was enough to finally give Kaleb Johnson some leeway, and Iowa was able to sneak Petras into the end zone to take a 10-0 lead in the quarter with 42 seconds remaining, but it cost them LaPorta the rest of the game due injuries.

Minnesota responded to the touchdown with their best drive of the day, eventually scoring a hit through the air for a big win that put the subject in the red zone. Two games later, Ibrahim found the end zone and we had a new ball game.

Iowa had a great drive that moved in response…until the game’s second bad shot sent Iowa out of field goal reach. Minnesota responded with another powerful drive in the run game as Ibrahim continued to feast against Iowa’s run defense. But the Gophers failed to complete a field goal, and Iowa still went into the half 10-7.

Iowa failed to get anything going on his first drive of the second half and holed the ball to Minnesota. The Gophers couldn’t seem to either… until Ibrahim ripped off another huge run to put the Gophers in the red zone. But once again the Gophers could do nothing but tie the game.

The running game finally showed signs of life in Iowa’s response drive thanks to the Leshon Williams/Kaleb Johnson duo. But one game after Johns demolished a huge win, Petras was fired and failed to get going in 3rd and for a very long time, and once again the Hawkeyes were forced to punt from positive yardage.

Luckily, Tory Taylor had one of his best punts in recent memory, forcing the Gophers to start at the 3-yard line. Iowa had a favorable 3rd and 3rd, but Ibrahim converted with another big run. But the new set of downs wasn’t fruitful, and Iowa forced a gopher punt that was returned well by Cooper DeJean.

But once again Iowa couldn’t do anything with it, with Petras bringing down a wide open Nico Ragaini that would have gone for 6. But Taylor made it big again, handing the ball back to the Gophers deep in their own territory again.

But Minnesota had the answer, and his name was Mo Ibrahim. Iowa’s run defense and tackling in general just wasn’t there the whole game. Even the Minnesota quarterback had a tremendous rush that the Hawkeye defense couldn’t stop.

Things looked bleak as Minnesota kept moving the ball and milking the clock, but on the 3rd and 5th near the red zone, Ibrahim made his first mistake of the game, fumbling as he tried to save his arm for first reaching down and handed the ball back to Iowa.

Iowa’s first game went for nothing, and Iowa’s second was almost picked up, and on the 3rd and 10th Petras Brecht couldn’t find double cover. Incomplete. 3 and out, giving Minnesota the ball back around 40, just over 4 minutes to play.

Ibrahim immediately released another big game. Iowa found itself with a 3rd and 7 as the clock continued ticking down to two minutes…but the MInnesota pass was tipped and picked up by Jack Campbell, who took him home and gave the lead back to Iowa…but the call was that Campbell had kicked out of bounds and the touchdown didn’t count.

But Petras responded with an absolute laser on Luke Lachey, who immediately put Iowa in the red zone with just under 90 seconds left. Minnesota used up their timeouts and Iowa failed to convert in 3rd and 1st place. There was even a check to see if Kaleb Johnson was fumbling, but he was down.

After a long delay, with 31 seconds left, Drew Stevens hit the 21-yard field goal…but Iowa iced his own kicker. On the second try, Stevens barely hit but completed the field goal and returned the ball to the Gophers with 28 seconds remaining.

But the Gophers couldn’t get anything through the air, and Iowa walked away with the win.

2,562 days AND COUNTING with Floyd in Iowa City.