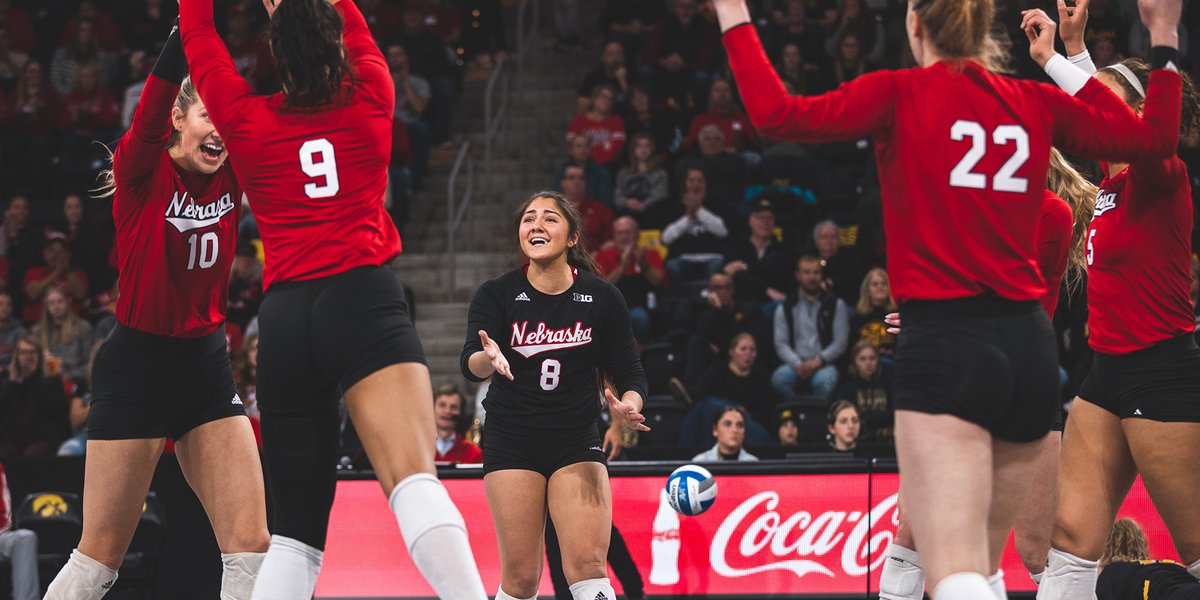 Coupled with Ohio State’s 3-1 loss in Maryland on Friday night, the Huskers now have their own destiny in their hands of claiming at least part of the Big Ten title by winning their remaining three games.

Madi Kubik had 14 kills and nine digs while hitting .407, and Ally Batenhorst had 11 kills. Lindsay Krause also hit double digits with 10 kills and a hit rate of .471.

Nicklin Hames had 15 set assists while Kennedi Orr had 11 assists with eight digs. Lexi Rodriguez had a match-high of 19 digs as the Huskers held a dominant advantage in that stat, 55-34.

The Huskers also had more kills (44-27), aces (5-2), and blocks (6-5). Whitney Lauenstein served two aces while Hames, Rodriguez and Kenzie Knuckles each had one. Kaitlyn Hord led the Big Red with four blocks.

Set 1: Nebraska used a 7-0 run to break away from a 6-5 lead to a 13-5 lead. Kubik had two kills while Bekka Allick and Batenhorst had one each. And Allick and Krause also had a blockage. The Huskers extended the lead to double figures at 18-8, with Krause adding two more kills and Batenhorst and Hord adding one each. Iowa scored the next four points to go 18-12, but the Huskers finished the set with a 7-2 run and won 25-14, with Kubik grabbing three more kills. Nebraska hit .387 and held Iowa at .118.

Set 2: The Huskers and Hawkeyes played an even second game as the teams tied 14-14 with neither leading by more than three points. But the Huskers turned it around with kills from Kubik and Allick, an ace from Lauenstein and a block from Hames and Allick to take a 19-14 lead after a 5-0 sprint. Krause got three more kills, and a block by Lauenstein and Hord and a kill by Batenhorst ended the set 25-17 in Nebraska’s favour. NU hit .235 in the second game while Iowa hit .088.

Set 3: The Huskers opened the third set with a 6-1 lead and never looked back. Batenhorst and Kubik had early kills and Knuckles served an ace and had a kill to ignite Big Red. Kubik and Lauenstein notched kills and extended the lead to 9-3. After Iowa picked up three points for his best stretch of the set to go 9-6, Krause had two more kills and Lauenstein had a kill and a block with Hord before two cubic kills gave the Huskers a 17-10 lead brought. The match ended with two consecutive kills from Batenhorst for a 25-14 win. Nebraska hit a blistering .444 in the final frame, limiting Iowa to .111.