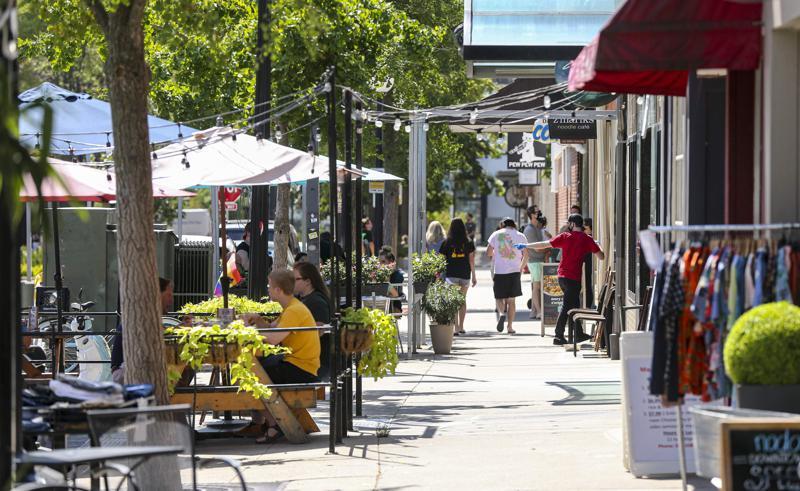 The Iowa City Council voted unanimously last Tuesday to expand sidewalk cafes where sidewalk cafes are permitted. This was the first consideration of the regulation. It has to be approved twice more.

Sidewalk cafes are currently permitted in downtown and the Riverfront Crossings neighborhood. The council voted to allow sidewalk cafes to operate without an alcohol license outside of these areas. According to a memo from the city, more sidewalk cafes will be encouraged throughout the community.

“Cafes would need to continue to comply with our street cafe ordinance and policy, as well as any other additional restrictions that staff or the city manager deem appropriate,” Deputy City Manager Rachel Kilburg said. “For example, if you run a coffee shop in a residential area, opening hours may need to be reduced.”

The City Council heard an update on the Sidewalk Cafe program at its September 6 working session, along with recommended changes to support a successful Sidewalk Cafe environment. Recommendations included expanding the number of street cafes allowed.

Further recommendations are expected to be presented to the Council at a meeting on December 6th.

Council member Janice Weiner authored the resolution, which was informed by similar land recognition statements from other institutions. Weiner said it is “high time we honored those on whose lands we live and thrive.”

“It’s an essential part of our history and I think if there’s anything we’ve learned over the last few years, it should be that we need to learn from our past, accept and acknowledge it and allow it to influence our present and our future . ‘ Weiner said.

City officials will post the land recognition statement on the city’s website and develop ways to incorporate it as people read city council agendas or enter council chambers.

Marion City Council has awarded 11 other small businesses a total of $106,844 through its Business Innovation and Support Grant. The council voted to allocate funds provided by the American Rescue Plan during a meeting Thursday.

Earlier this year, the council awarded 20 companies grants totaling $293,156 in the first round of the program. The program is managed as a partnership between the city and the Chamber of Commerce.

“Small businesses are the backbone of our local economy,” said Marion Mayor Nick AbouAssaly. “We are pleased to award ARPA funds to those companies that have been significantly impacted by the pandemic and to support them in their continued recovery.”

The grants are for small businesses with one to 10 employees. They provide grants ranging from $5,500 to $10,650, and each award comes with up to five hours of “mandatory business advice” from a business coach.

Cedar Rapids is working on building three fishing piers that will be fully accessible for people with disabilities to use at the Prairie Park Fishery.

The piers will have cantilevered decks that extend above the water’s edge, according to the city. The decks are designed to allow people of all mobilities to fish in deeper waters above the lake or along the shores.

Pier users will have amenities that are fully Americans with Disabilities Act compliant, from the parking lot to the water.

Parks Superintendent Mitch Ahrendsen told the Parks, Recreation and Waterways Commission this week that employees expect the piers to be completed this month, coinciding with the Iowa Department of Natural Resources filling the lake.

The new piers are part of the city’s ongoing effort to improve the accessibility of the city’s park system. Improvements are underway in the Southeast Parks quadrant at a cost of $2 million. The city reports that more than $4.9 million in improvements were made in the Northeast and Northwest quadrants.

The Ellis Pro Shop will remain open for holiday shopping through December 23rd. Holiday hours are 9:00am to 4:30pm Monday to Friday and 9:00am to 3:00pm on Saturdays. It is closed Thursdays and Fridays on Thanksgiving Day.

Government Notes are released on Mondays and include updates from area government agencies. Marissa Payne, Gage Miskimen, Izabela Zaluska, and Grace King of The Gazette contributed to this report.