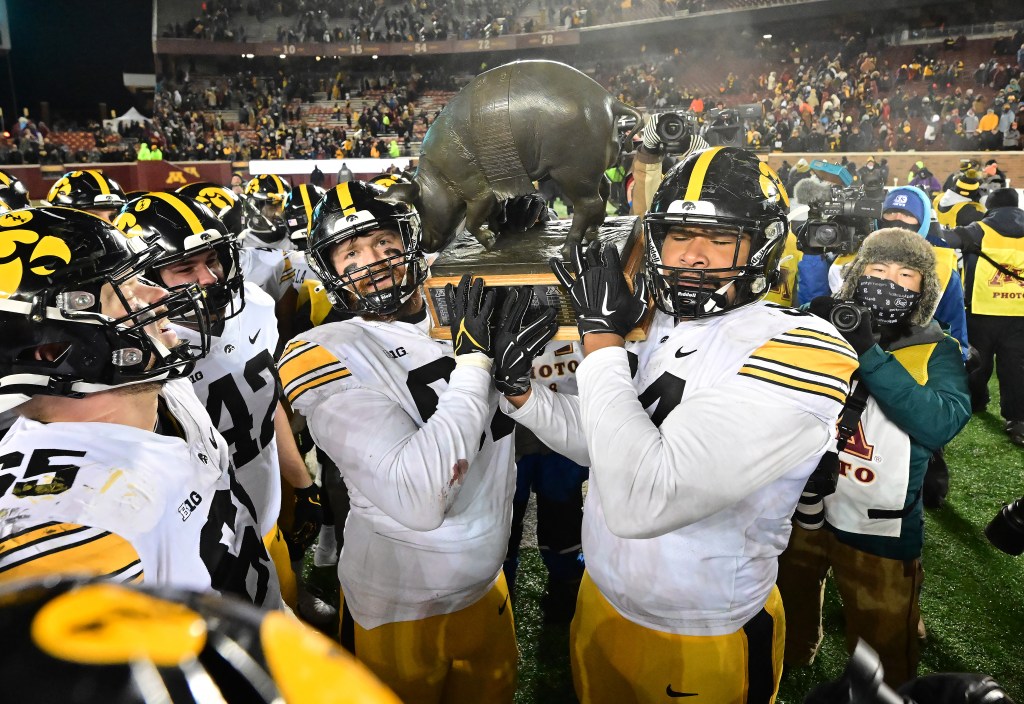 In order not to lose that rivalry trophy to Wisconsin next weekend, Minnesota will have to put aside the fact that they still don’t own the Floyd of Rosedale rivalry trophy after eight long years. The most recent setback for Iowa was a razor-thin 13-10 loss on Saturday at Huntington Bank Stadium.

Gophers coach PJ Fleck said he was disappointed but not disheartened with the result. But elements of despondency could be excused for the way it went down.

Fleck had likened Iowa’s defenses to a Venus flytrap, the carnivorous plant that lies in wait until the insect gets too close and then snaps shut with its unsuspecting meal inside.

“They just stay open, open, open and then the bug just can’t help it,” Fleck said on KFXN-FM Tuesday. “It goes in and gets the pollen and whoosh. It just swallows you up and they win a lot of games that way.”

But Fleck and Co. are not young, naive locusts. They should have learned how and why they lost to Iowa in the past and found a way not to repeat those mistakes.

But Fleck’s conservative approach of not being eaten had the same result.

Minnesota had a fourth and one of Iowa’s 16 with less than a minute left in the first half. Instead of trying, Fleck chose a field goal, and Matthew Trickett missed the 34-yard right touchline.

With Mo Ibrahim’s 35-yard rush, the Gophers had rushed 73 yards on a strong Iowa defense to create a great opportunity. Trailing 10-7, Fleck opted for the break points rather than attempting the lead.

Fleck was asked about his thought process when deciding not to try fourth place deep in Iowa territory. He thought the question concerned the decision to stab from his own 38 for fourth place in the first quarter.

“This game would take patience, and if you don’t get that and give Iowa… — remember, Iowa’s offense, statistically, if you give them a small field, they score points,” Fleck said. “Give them a long field, they will not score. I don’t regret this decision one bit.”

In the fourth quarter, the opportunistic Hawkeyes defense took prey when Minnesota had to pass. Athan Kaliakmanis, ranked 3rd and 7th of Iowa’s 33, attempted to cross-thread a pass to Le’Meke Brokington. It was tipped by Riley Moss and intercepted by Jack Campbell, who returned it 30 yards to set up the game-winning field goal.

On a cold and windy day, the Gophers didn’t challenge the Hawkeyes’ secondary, throwing only two passes for more than 20 yards. Those two deep balls came in their last two tries. While two of the four quarters were spent going upwind, there was nothing deep for nearly 60 minutes until that final drive with less than 30 seconds of ditch remaining.

Both were nearing completion.

But as frustrating as another loss to Iowa will be for those linked with Minnesota, the U needs to put it in the past, and fast. The Gophers have done so before, after a three-game losing streak with three straight wins before Saturday.

The Gophers have another rivalry game on the horizon, and if they lose back-to-back their trophy boxes would only contain their most recent bowl-game silverware. A loss to Wisconsin would result in a 7-5 record, with an even more lackluster Bowl on the horizon in December.

This is when the gophers need to fire their shot.