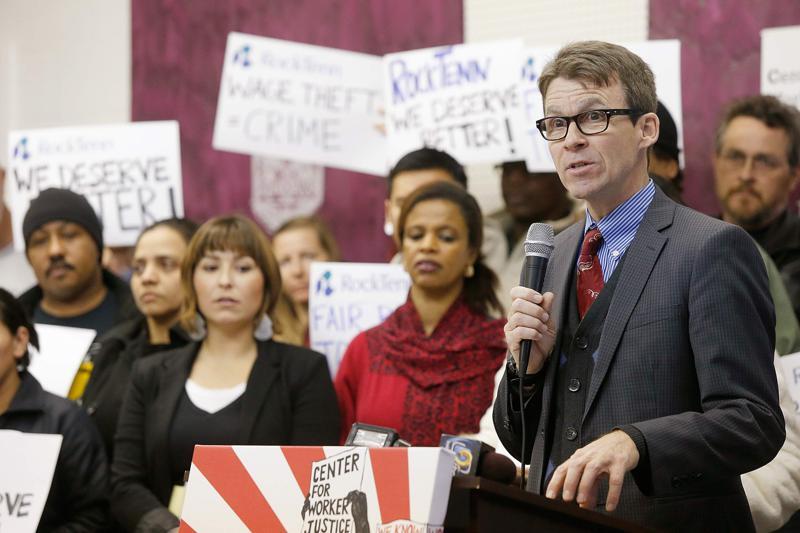 Then-Senator Joe Bolkcom speaks at a press conference in Iowa City in 2014 about cracking down on wage theft. (The Gazette)

DES MOINES – Workers in Iowa are not paying the estimated $900 million owed to them annually, affecting one in seven workers in the state, and state regulators are doing little to enforce violations, according to a report by a liberal-leaning advocacy group.

The report comes from Common Good Iowa, which describes itself as a nonpartisan, nonprofit organization. The group is made up of policy advocates and researchers and advocates for “people-centered political solutions to our state’s most pressing problems.”

According to the report, 250,000 Iowa workers are not getting paid the $900 million owed to them annually:

The report was written for Common Good Iowa by Sean Finn, whose focus for the group is on labor standards and practices.

Finn analyzed data from the Federal Bureau of Labor Statistics and Iowa Workforce Development and records from the US Department of Labor.

“This insidious and growing problem costs Iowans 10 times more than all other forms of theft combined,” Finn said in a press release.

Besides these unpaid wages, state and federal agencies are doing little to punish companies for violators, the report says. For every $1,000 in wage theft, only $2 is recovered from government agencies — less than 1 percent — the report said.

“These long-ignored issues are a public policy failure. Legislators and government agencies have been aware of this issue for at least a decade, but have been unwilling to take action,” Finn wrote in the report.

“Salary theft not only defrauds workers and taxpayers, but responsible employers who must compete with the bad actors who unlawfully undercut them.”

Once in control of the Iowa Senate, the Democratic state legislature passed legislation to curb wage theft.

A 2015 bill would have required employers to keep records of employment conditions and protect employees who testify against employers from retaliation.

The proposal never passed the House of Representatives with a Republican majority.

In its report, Common Good Iowa recommends policy changes that would provide stronger worker protections and enforcement of these laws.

Among other things, the group recommends more state investigators and tougher penalties for offending companies.

“Thousands of workers in Iowa go to work every day thinking they’re protected, that the law requires their employers to pay them the right amount on time,” Paul Iversen, occupational educator at the University of Iowa Labor Center, who works on cases of wage theft said for the report.

“Unfortunately, for many Iowans, that just isn’t true. The laws exist, but they are ignored, and a law is only as good as its enforcement.”

A spokesman for the Iowa Department of Human Resources, noting that many major wage-stealing claims are pursued in court rather than by the government, said the agency is working hard to ensure Iowa workers are paid fairly and that all complaints are addressed get a fair hearing.

“Iowa Workforce Development agrees that unpaid wages are an important issue for Iowa workers, and we are working diligently on multiple fronts to ensure workers are receiving all the money that is due them,” said the agency’s spokesman, Jesse Dougherty, in an email.

“This includes our newly expanded efforts, supported by a portion of a recently announced $2.9 million grant, to increase efforts to identify Iowa workers who are misclassified under the law. “

According to State Division of Labor data shared by Dougherty, the Iowa agency received 538 wage complaints in 2018, 549 in 2019 and 550 in 2020. He said that’s the average claim settled by the department over the past three years was about $323.

The State Chamber of Labor first tries to solve complaints together with the employer; If a claim can’t be resolved, it goes to small claims court, Dougherty said.

Dougherty said any Iowa worker who believes they have not been paid the wages they are entitled to should file a complaint on the Iowa Division of Labor’s website at iowadivisionoflabor.gov/idol/wag-hour.