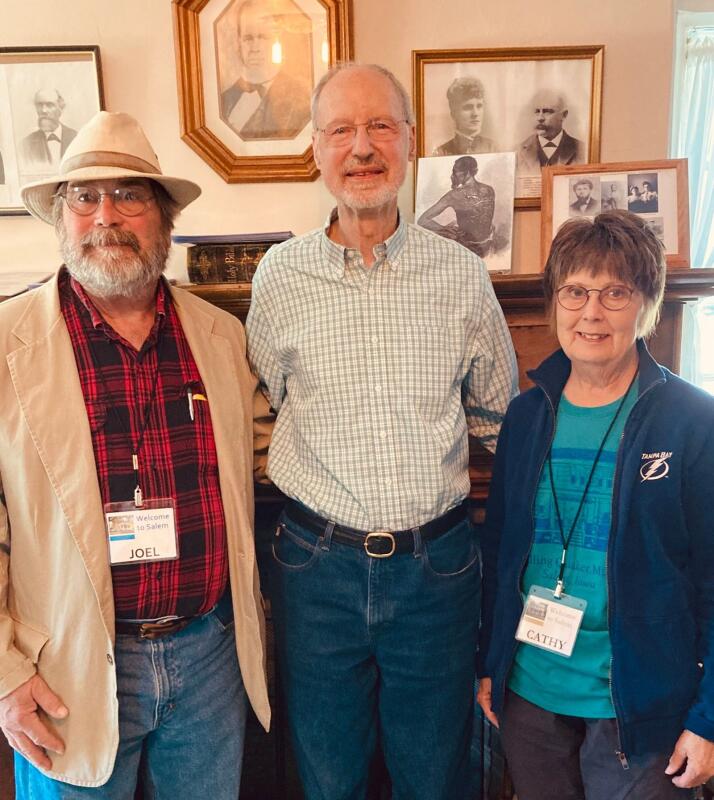 From left are Joel Garretson, John Gerdes and Cathy Garretson Helman, who met at the Lewelling Quaker Museum in Salem to share their family stories. The Garretsons are descended from an Iowa abolitionist, and Gerdes is descended from a Missouri slave owner. (Photo courtesy of Larry Roth)

History students at the Lewelling Museum know of the June 1848 Slave Escape, which is a cornerstone of the museum, which is on the National Park Service Underground Railroad Network to Freedom.

In October 1848, Ruel Daggs of Luray, Clark County, Missouri sued nineteen Salem men for stealing his property, nine slaves who had sought their freedom by fleeing north to Salem. In a dramatic jury trial held in Burlington’s newly formed United States District in 1850, six of the men were found to have violated the Fugitive Slave Act of 1793 by harboring the slaves and helping them escape. The six were fined $2,900.00, the judge’s estimated value of the slaves who were not captured and brought back to Missouri.

The handwritten transcript of the Ruel Daggs vs. Elihu Frazier et al. describes chaotic and highly charged events taking place in Salem when Daggs’ bounty hunters, the nine refugees and twelve Salem abolitionists converged in the bush south of town.

The subpoena for the court case called Joel C. Garretson (1809-1895), a nearby farmer and abolitionist, as a witness to the events. During this time, Garretson served as a conductor on the Underground Railroad, secretly herding slaves north as they sought their freedom. Family accounts tell of a $500.00 bounty placed by Missourians for Garretson’s capture.

In a revealing exchange at the museum, under the watchful portrait of Quaker abolitionist Henderson Lewelling, Gerdes, Cathy Garretson Helman, brother Joel H. Garretson, and Lewelling museum historian Mary Savage shared their perspectives on these historic events. Cathy and Joel are the great-great grandchildren of conductor Garretson. Joel and Mary are members of the Henry County Historic Preservation Commission and Cathy, of the Lewelling Board of Directors.

This is the first known visit by a Daggs descendant to the museum, established in 1959.

Reflecting on the museum visit, John Gerdes wrote to the LQM board: “The story of Ruel Daggs, my great-great-great-grandfather, is the most shameful part of our family history. Eventually the slaves got their freedom, but our family got the farm. The Daggs family kept what the enslaved people earned.

“I hope more and more people will learn about the window into history that you are opening for them at LQM. Your mission and lesson are extremely important: slavery was dehumanizing, but ordinary people who lived by their beliefs helped those fleeing injustice. This lesson should inspire us all to stand up against racial injustice.”

John and Genie Gerdes have joined as “Lewelling Partners” and have made a generous donation to the museum.