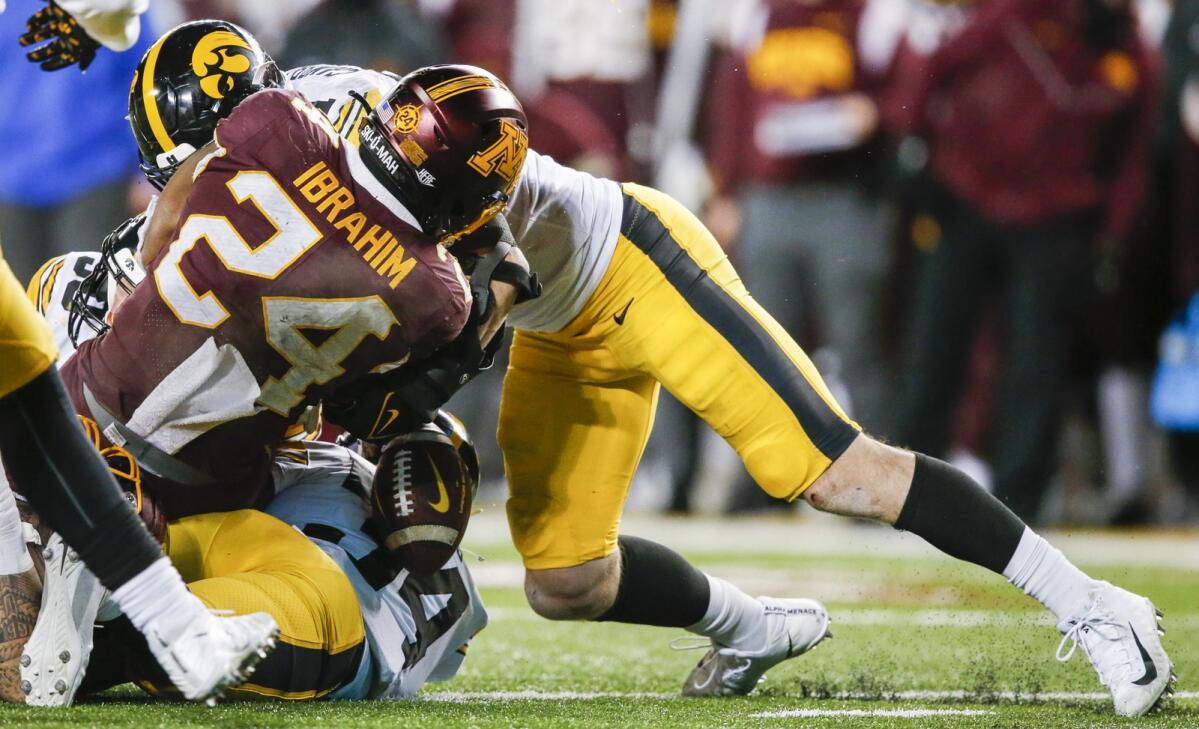 Minnesota running back Mohamed Ibrahim (24) fumbles with the football after he was hit by Iowa linebacker Jack Campbell (31) in the fourth quarter of the Hawkeyes’ 13-10 win over the Gophers Saturday at Huntington Bank Stadium in Minneapolis. (Jim Slosiarek/The Gazette)

MINNEAPOLIS — Jack Campbell spoke to his defensive teammates about the “why” in the fourth quarter and then was the who, what, where and when.

The budding All-America senior linebacker’s five “Ws” carried the Iowa football team to a big “W,” a 13-10 win in Minnesota that set the Hawkeyes up for a second straight Big Ten West title, when they beat Nebraska at home Friday.

It was in the fourth quarter during one of many endless TV timeouts, and the Hawkeye defense was on the field and not feeling well in a 10-10 game. Another All-America-in-waiting, senior running back Mohamed Ibrahim, beat Iowa like few during Phil Parker’s tenure as defensive coordinator.

Ibrahim had 36 carries for 239 rushing yards as the Gophers had a 3rd and 4th at the Iowa 13. During a time out in Minnesota on that drive, which started at the Gophers 3, Campbell began speaking to fellow defenders.

“He broke us and said these are the moments you dream of when you’re a kid,” said Iowa linebacker Seth Benson. “That’s really true. Tie ball game, Big Ten football in November. Us against them.

So, back to that game in the 3rd and 4th red zones. Ibrahim carried 13 carries for 65 yards on that drive alone. He got the ball back. Campbell hit him, hitting the ball and knocking it out of Ibrahim’s grip. Iowa’s Deontae Craig covered it up at the Iowa 9.

That was left at 5:07. The Hawkeyes went 3-and-out without gaining a yard and punted to the Minnesota 45. Ibrahim rushed for 19 yards. But the next two games totaled just three yards, and Minnesota passed on 3rd and 7th places from Iowa 33.

The tipped throw found its way into Campbell’s hands, perhaps because it was in just the right spot, as is his habit. He returned it 30 yards. He and his teammates insisted it should have been a pick-6, claiming he never pushed the limits.

It does not matter. Of the Minnesota 45 with 2:06 left, Iowa quarterback Spencer Petras hit with tight end Luke Lachey for 33 yards down the middle in one of the best clutch plays of Petra’s career. Iowa drove to the 3 before Drew Stevens kicked a short field goal with 28 seconds left and the Hawkeyes won.

An offense with a player rushing 263 yards scored just 10 points and lost. You never see that. Never. It’s the darn thing in Iowa’s season of darns, like gaining just 146 yards against Wisconsin the week before and winning by two touchdowns.

Of the fumbling he caused, Campbell said, “I was just trying to hit him as hard as I could. Obviously, I might have gotten the ball a bit. Just go to the ball, the ball won’t find you. You have to want the ball. If you come to the ball and put your hat on the ball…good things will happen.”

That was Good Thing I. The pick was Good Thing II. Iowa cornerback Riley Moss interrupted a pass intended for gopher receiver Le’Meke Brockington at the Iowa 25 and put a short caramel in Campbell’s hands .

“It’s always a teammate that gives you that opportunity,” Campbell said, “and you just have to take it.”

Iowa had a heaven of defensive stars during the Kirk Ferentz era, really great players. But when has someone made two such important moves late in a game, a tied and critical away game? This on a day when the defense had been beaten old-fashionedly by an opposing offensive.

“Talent running back, talented offensive line,” Campbell said. “We will never give up. So we just kept going. And then the opportunity presented itself to me.”

He meant “himself”. But “myself” was just as accurate.

“His resilience, just his positivity, everything about him is just top notch,” said Ferentz. “Then he comes in big pieces.”

And this defense? Eight times it has held opponents to 10 or fewer points in 11 games. eight times! That defense dominated most of those days. In this case, it took the hits but never went down.

“It’s not fun out there if you can’t stop the run,” Ferentz said. “Boy, get into a game like this, it just hurts. And no one feels worse than the guys on the field. They play hard and do everything they can.

“You think you turned them off and then next thing you know (Ibrahim) is cutting it back for a 3 yard gain or 13 yard gain and that makes it hard.

“But the boys kept playing.”

Now they are just one win away from playing Indianapolis, an absurd scenario less than a month ago. It’s a team that’s the darn thing.